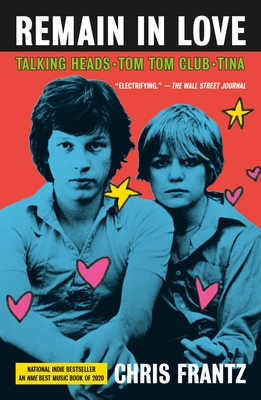 One of the most dynamic groups of the ‘70s and ‘80s, Talking Heads, founded by drummer Chris Frantz, his girlfriend Tina Weymouth, and lead singer David Byrne, burst onto the music scene, playing at CBGBs, touring Europe with the Ramones, and creating hits like “Psycho Killer” and “Burning Down the House” that captured the post-baby boom generation’s intense, affectless style.

In Remain in Love, Frantz writes about the beginnings of Talking Heads—their days as art students in Providence, moving to the sparse Chrystie Street loft Frantz, Weymouth, and Byrne shared where the music that defined an era was written. With never-before-seen photos and immersive vivid detail, Frantz describes life on tour, down to the meals eaten and the clothes worn—and reveals the mechanics of a long and complicated working relationship with a mercurial frontman.

At the heart of Remain in Love is Frantz’s love for Weymouth: their once-in-a-lifetime connection as lovers, musicians, and bandmates, and how their creativity surged with the creation of their own band Tom Tom Club, bringing a fresh Afro-Caribbean beat to hits like “Genius of Love.”

Studded with memorable places and names from the era—Grace Jones, Andy Warhol, Stephen Sprouse, Lou Reed, Brian Eno, and Debbie Harry among them—Remain in Love is a frank and open memoir of an emblematic life in music and in love.

Remain in Love] has great storytelling and amazing detail about adventures that Chris and I have shared in our parallel universes. As the Brits say: I'm gobsmacked. I devoured this book and all the memories and all the love Chris has for Tina . . . . One of the most potent examples of living the dream.” —Debbie Harry

"From the first time I saw Talking Heads live (CBGB, 1976), I've had a huge thing for Tina Weymouth. And since then I've been biding my time, waiting for the right moment to make my move. But after reading Remain in Love by Chris Frantz, it's become pretty clear to me that she's already in a relationship (see pages xi, 3, 33-34, etc.), and what's more, it looks to be serious (pages 41, 43-48, and especially 147). But you know something? That's OK. I'm happy for Tina, and for Chris, a great drummer who has written a great book." —Bill Murray

"A music memoir that is as much about love as music. [Remain in Love] is a gold mine for fans of the 1970s and '80s music scene." —Kirkus Reviews

"Fun, cheerful, and eventful, this memoir has just the right amount of edge." —Publishers Weekly

“This swift-paced, well-written book has the upbeat tone of dreams coming true. Frantz conveys the excitement of his adventures from boyhood to art school to international rock-stardom with honesty and enthusiasm . . . . I dare any drummer to write a better book!” —Duncan Hannah, author of Twentieth Century Boy

"While [Remain in Love] does offer a vivid backstage glimpse of New York’s downtown scene in the ‘70s and beyond, what sweetens the read is that even after all these years, the torch Frantz carries for his spouse could still burn down the house." —O, The Oprah Magazine

“Heads and drums and funk and roll: herewith Chris Frantz outs himself as a Writing Head and Raconteur First Class, bringing it on an engaging narrative which combines an enchanting love story with an eye-opening disquisition on the upsides and downsides of being in bands with unusual people.”
—Charles Shaar Murray, author of Crosstown Traffic: Jimi Hendrix and Post-War Pop

“Crackling with verve, comedy, calamity, crisp detail, forward motion, and abiding affection, speckled with an all-star cast of punk legends and pop idols, Chris Frantz's Remain in Love is a rock music memoir like none other—a candy kiss with a kick to it.” —James Wolcott, author of Lucking Out