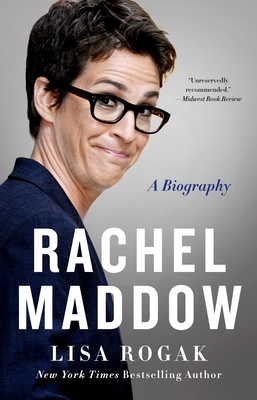 The first biography of the most popular anchor in cable news.

Rachel Maddow has beaten the odds in a way that’s novel in today’s America: she uses her brain.

In a world of banal and opinionated soundbites, she regularly crushes Sean Hannity’s ratings thanks to her deeply researched reports. And in our highly polarized world, Maddow amiably engages the staunchest conservatives, while never hesitating to expose their light-on-facts defenses.

As a result, she's become the top anchor for MSNBC and a beloved representative for all that progressive America holds dear. The news that Maddow was the first publicly-out lesbian to anchor a prime-time TV news show seemed almost anticlimactic to her millions of viewers, who will be surprised and intrigued by little-known details of her life, as written by New York Times bestselling biographer Lisa Rogak.

Growing up in a conservative California town – and viewing herself as a perennial outsider – helped spark an early interest in activism. After attending Stanford and Oxford, she opted for a minimum-wage job as a radio DJ in a tiny Massachusetts market while finishing her Ph.D. She planned to pursue a career as an activist, but 9/11 changed all that, so she returned to local radio where she could help listeners by "explaining stuff." A stint at Air America raised her national profile, which led to her groundbreaking MSNBC show where she dissects the news of the day with an approach found nowhere else on TV.

"Thoughtfully explores how Maddow became the legend she is today. " —BookRiot

"Rogak creates a compelling biography...Rachel Maddow is an affectionate portrait of its subject." —Philadelphia Gay News