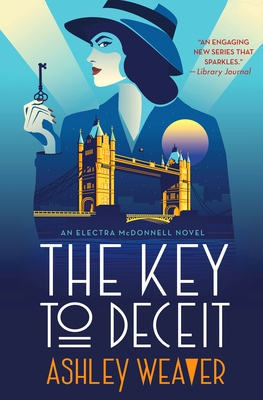 This is book number 2 in the Electra McDonnell Series series.

The second in the Electra McDonnell series from Edgar-nominated author Ashley Weaver, The Key to Deceit, is a delightful World War II mystery filled with spies, murder, romance, and wit.

London, 1940. After years of stealing from the rich and giving to the poor—well, to themselves, anyway—Ellie McDonnell and her family have turned over a new leaf as they help the government’s war effort. It’s true that the straight-laced Major Ramsey didn’t give them much choice, but still, Ellie must admit she doesn’t miss breaking and entering as much as she might have thought. What she does miss is the challenge of unlocking an impossible code and the adrenaline rush that comes from being somewhere she shouldn’t.

So when Major Ramsey turns up unannounced with another job, she can’t say no. A woman’s body has been found floating in the Thames, with a bracelet locked onto her wrist, and a cameo locket attached to it. It’s clear this woman was involved in espionage, but whose side was she on? Who was she reporting to? And who wanted her dead?

ASHLEY WEAVER is the Technical Services Coordinator at the Allen Parish Libraries in Oberlin, Louisiana. Weaver has worked in libraries since she was 14; she was a page and then a clerk before obtaining her MLIS from Louisiana State University. She is the author of Murder at the Brightwell, Death Wears a Mask, and A Most Novel Revenge. Weaver lives in Oakdale, Louisiana.

One of New York Post's "Best New Books to Read"

"Excellent... Weaver does a sensational job of evoking 1940 London and populates the story with endearing characters... Readers will hope to see a lot more of Ellie."—Publishers Weekly (starred)

"Competing romances, slippery spies, and the horrors of the Blitz combine in an exciting mystery/adventure."—Kirkus Reviews

"The setting of London during World War II comes to life in this absorbing plot with its fresh take on spying, murder and war on the home front. Each of the characters is well-developed and endearing, and Ellie's sharp wit and criminal expertise play brilliantly against the by-the-book persona of Major Ramsey and the suave, slightly felonious leanings of Felix."—Shelf Awareness

"The characters all shine . . . If you love history and mystery combined with a bit of irony and wry humor, you will enjoy this book."—Historical Novel Society

"As this is only the second in her series, Weaver opens the door to garnering many fans as she develops her characters and possible romances travel between Ellie and the major or Felix. It’s easy to get wrapped up in Weaver’s storytelling skills as she carefully unfolds her story."—New York Journal of Books

"The mysteries, danger, and emotional hills and valleys that are life in wartime will keep readers rapt."—First Clue