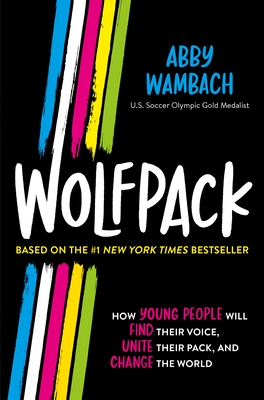 In this young readers adaptation of her #1 New York Times bestselling book, two-time Olympic gold medalist and FIFA World Cup champion Abby Wambach inspires the next generation to find their voice, unite their pack, and change the world.

From rising young star to co-captain of the 2015 Women’s World Cup Champion team, Abby Wambach’s impressive career has shown her what it truly means to be a champion. Whether you’re leading from the bench or demanding the ball on the field, real success comes when you harness your inner strength, forge your own path, and band together with your team.

Updated with stories that trace her journey from youth soccer to the hall of fame, this young readers adaptation of Abby’s instant bestseller Wolfpack is for the next generation of wolves ready to change the game.

ABBY WAMBACH is a two-time Olympic gold medalist, FIFA World Cup Champion, and the highest all-time international goal scorer for male and female soccer players. She is an activist for equality and inclusion and the New York Times bestselling author of Forward: A Memoir. Abby is co-founder of Wolfpack Endeavor, which is revolutionizing leadership development for women in the workplace and beyond through her champion mindset, individualized coaching, and team-bound focus. Abby lives in Florida with her wife and three children.