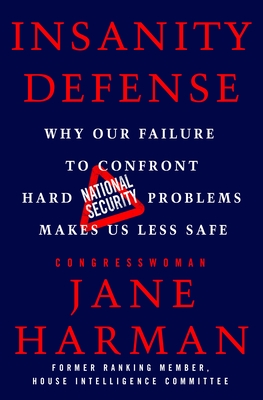 An insider's account of America's ineffectual approach to some of the hardest defense and intelligence issues in the three decades since the Cold War ended.

Insanity can be defined as doing the same thing over and over again but expecting a different result. As a nation, America has cycled through the same defense and intelligence issues since the end of the Cold War. In Insanity Defense, Congresswoman Jane Harman chronicles how four administrations have failed to confront some of the toughest national security policy issues and suggests achievable fixes that can move us toward a safer future.

The reasons for these inadequacies are varied and complex, in some cases going back generations. American leaders didn’t realize soon enough that the institutions and habits formed during the Cold War were no longer effective in an increasingly multi-power world transformed by digital technology and riven by ethno-sectarian conflict. Nations freed from the fear of the Soviets no longer deferred to America as before. Yet the United States settled into a comfortable, at times arrogant, position as the lone superpower. At the same time our governing institutions, which had stayed resilient, however imperfectly, through multiple crises, began their own unraveling.

Congresswoman Harman was there—as witness, legislator, exhorter, enabler, dissident and, eventually, outside advisor and commentator. Insanity Defense is an insider’s account of decades of American national security—of its failures and omissions—and a roadmap to making significant progress on solving these perennially difficult issues.

During her long public career, JANE HARMAN served nine terms in Congress, including four years after 9/11 as ranking member of the House Intelligence Committee, and recently completed a decade at the nonpartisan Wilson Center as its first female president and CEO. Harman is recognized as a national expert at the nexus of security and public policy issues, and has received numerous awards for distinguished service. She has served on adivsory boards for the CIA, Director of National Intelligence, and the departments of Defense, Homeland Security, and State. Harman is currently a member of the Aspen Strategy Group and the advisory board of the Munich Security Conference and co-chairs the Homeland Security Experts Group with former Homeland Security secretary Michael Chertoff.

"A brilliant retrospective, full of exceptional insights on the major developments in the post-Cold War and post-9/11 worlds from a widely respected figure who was 'in the room where it happened'--and who also provides very well-considered thoughts on how we should proceed in the post-pandemic world." --General David Petraeus, US Army (Ret.)

"Jane Harman, a widely acclaimed expert on intelligence matters, takes the reader inside the major security debates and decisions of the past 30 years. Her compelling narrative analyzes both successes and failures in leadership and in the structure, scope, and authorities of agencies as officials attempted to anticipate and respond to evolving global threats. As one of the bipartisan coauthors of the landmark 2004 law instituting the most sweeping changes in our Intelligence Community since the end of World War II, Jane Harman knows first-hand the challenges of legislating significant reforms. This book is must-reading for policy-makers and other leaders responsible for our security." --Senator Susan Collins, former chairman of the U.S. Senate Homeland Security Committee

"Jane Harman is a fierce advocate for strong national security policies and bold policies to confront the global challenges facing America. As a California congresswoman, she helped create the legislation establishing the modern intelligence community. In the two decades since 9/11, few people have been as influential as Jane Harman in helping to make sure Washington has its priorities right when it comes to national defense, homeland security, and intelligence. This book is a front-row seat to those momentous decisions and years of consequence." --Leon Panetta, former US secretary of defense, CIA director, White House chief of staff, OMB director, and member of the US House of Representatives