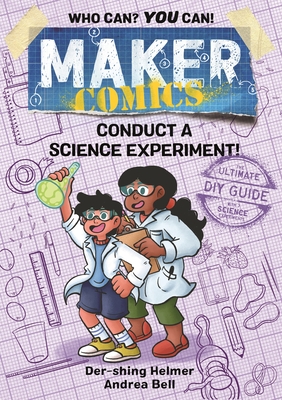 Reed’s moms are about to leave for a summer trip, and he can’t wait to spend his break playing games and making videos with his friends. But it turns out that after a year of suffering science grades, Reed’s parents have called in reinforcements: his big sister, Olive, who’s come home from college to help him out.

At first, Reed’s furious to have to swap his internet time for summer school, but it turns out that science is more than just memorizing facts from books. Olive’s planned a jam-packed week of hands-on experiments, and bit by bit Reed has to admit that science can be kind of cool.

Der-shing Helmer is an Eisner and Ignatz winning indie comic creator and publisher who mostly creates science-fantasy and educational comics. They are the creator/ artist of the acclaimed webcomics The Meek and Mare Internum, creator/ editor of the Alloy Anthology, and co-owner of Ascend Comics. Their favorite way of participating in everyday science is learning how to grow rare plants from seed, and sharing plants and knowledge with others.

Andrea Bell is an illustrator and comic artist living in Chicago through the best and worst seasons. In 2013 she earned her BFA in Illustration from Columbia College Chicago and has since self-published "Fair Voyage" and "Still Waiting." Today Andrea works as a freelance illustrator and during her free time enjoys rock climbing, curating playlists, indulging in video games, and a warm meme on a cold day.