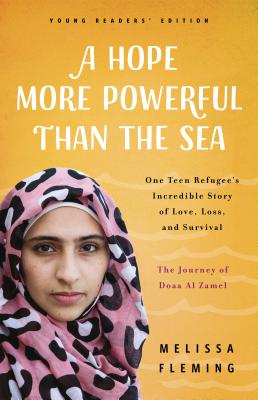 A Hope More Powerful Than the Sea tells the story of Doaa Al-Zamel, a Syrian girl whose life was upended in 2011 by her country’s brutal civil war. She and her family escape to Egypt, but life soon quickly becomes dangerous for Syrians in that country. Doaa and her fiancé decide to flee to Europe to seek safety and an education, but four days after setting sail on a smuggler’s dilapidated fishing vessel along with five hundred other refugees, their boat is struck and begins to sink...

Doaa’s eye-opening story, as told by Melissa Fleming, represents the millions of unheard voices of refugees who risk everything in a desperate search for a safe future.

MELISSA FLEMING is chief spokesperson for the United Nations High Commissioner for Refugees (UNHCR). She travels to war zones and refugee camps to give voice to the millions of people forcibly displaced from their homes. She is frequently quoted in international media, including The New York Times, The Washington Post,CNN, and NPR. She first told Doaa's story on the TED stage and her talks are featured on TED.com.

Praise for the adult edition:

“Some books should be required reading. A Hope More Powerful than the Sea is one of those books. Not simply because the tale of a Syrian refugee is so timely or the topic so important...But because of its lessons about persistence, selflessness, and hope, which are the heartbeat of this true story.” —The Christian Science Monitor

“The story of Doaa is dramatic, riveting, and ultimately hopeful. A Hope More Powerful than the Sea provides a portrait of the refugee crisis that cannot be matched by any amount of cable news coverage.” —Brandon Stanton, author of Humans of New York

“This is an emotional read, at times painful, but it is above all a poignant tribute to hope, to resilience, and to the capacity for grace and generosity that dwells deep within the human heart. This is a book written for our times.” —Khaled Hosseini, author of The Kite Runner

“An astonishing and important story.” —Neil Gaiman, author of The Graveyard Book