To Hold Up the Sky (Paperback) 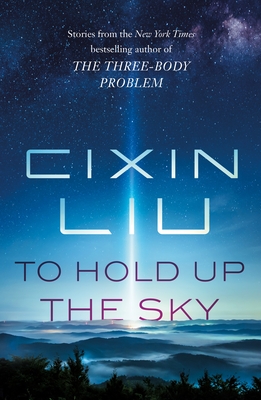 To Hold Up the Sky (Paperback)

From New York Times bestselling author Cixin Liu comes a short story collection of captivating visions of the future and incredible re-imaginings of the past.

In To Hold Up the Sky, Cixin Liu takes us across time and space, from a rural mountain community where elementary students must use physics to prevent an alien invasion; to coal mines in northern China where new technology will either save lives or unleash a fire that will burn for centuries; to a time very much like our own, when superstring computers predict our every move; to 10,000 years in the future, when humanity is finally able to begin anew; to the very collapse of the universe itself.

Written between 1999 and 2017 and never before published in English, these stories came into being during decades of major change in China and will take you across time and space through the eyes of one of science fiction's most visionary writers.

Experience the limitless and pure joy of Cixin Liu's writing and imagination in this stunning collection.

CIXIN LIU is the most prolific and popular science fiction writer in the People’s Republic of China. Liu is an eight-time winner of the Galaxy Award (the Chinese Hugo) and a winner of the Chinese Nebula Award. Prior to becoming a writer, he worked as an engineer in a power plant. His novels include The Three-Body Problem, The Dark Forest, and Death's End.

“An innovative and compassionate look at how knowledge shapes and changes humanity. Liu grounds his tales in contemporary Chinese life and society, using he sci-fi genre to tackle questions about humanity's place in the universe . . . a must have for readers of hard science fiction."—Publishers Weekly, on To Hold Up the Sky

“A well rounded view of Liu's work, showing him both in the mode familiar to readers of The Three-Body Problem trilogy as well as in other, perhaps more unexpected, styles. Highly recommended for fans of Liu's work or for those interested in Chinese sf in general.”—Booklist, starred review, on To Hold Up the Sky

“These stories excel at linking hard science fiction with global humanism and quiet moments of emotion. Liu's writing maintains a calm, matter-of-fact demeanor, even as it conveys inventive cruelty and beautiful imagery . . . [This collection] will appeal to readers of literary fiction and classic science fiction alike.”—Shelf Awareness on To Hold Up the Sky

“It is magic, this collection of short stories Liu wrote and published ten, 20, 30 years ago. It is a time machine; a split-vision tunnel that lets you go back in time while staring forward, to see what 2003's or 1985's version of 2010 or 2020 or 3000 looked like from China... To Hold Up The Sky gives us a window that looks out over a different sci-fi landscape than we've seen in decades.—NPR

“This audacious and ultimately optimistic early work will give Liu's English-reading fans a glimpse at his evolution as a writer and give any speculative fiction reader food for deep thought.”—Shelf Awareness on Supernova Era

Praise for the Three-Body trilogy

“The War of the Worlds for the twenty-first century . . . Packed with a sense of wonder.”—The Wall Street Journal

“Tackles politics, philosophy, and virtual reality in a story that moves at a thriller's pace.”—The Washington Post

“Evokes the thrill of exploration and the beauty of scale.”—The New Yorker

“Stunning, elegant . . . A science fiction epic of the most profound kind.”—NPR