Why Don't You Write My Eulogy Now So I Can Correct It?: A Mother's Suggestions (Hardcover) 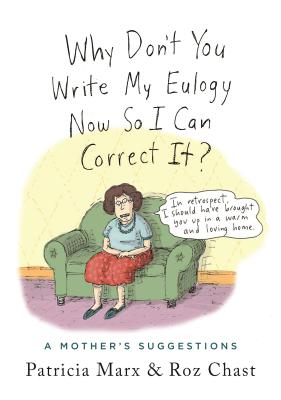 Why Don't You Write My Eulogy Now So I Can Correct It?: A Mother's Suggestions (Hardcover)

Every mother knows best, but New Yorker writer Patty Marx's knows better. Patty has never been able to shake her mother's one-line witticisms from her brain, so she's collected them into a book, accompanied by full color illustrations by New Yorker staff cartoonist Roz Chast. These snappy maternal cautions include:

If you feel guilty about throwing away leftovers, put them in the back of your refrigerator for five days and then throw them out.

If you run out of food at your dinner party, the world will end.

When traveling, call the hotel from the airport to say there aren't enough towels in your room and, by the way, you'd like a room with a better view.

Why don't you write my eulogy now so I can correct it?

Every child will want to buy this for mom on Mother's Day!

Roz Chast grew up in Brooklyn. Her cartoons began appearing in the New Yorker in 1978. Since then, she has published more than one thousand cartoons in the magazine. She has written and illustrated many books, including What I Hate: From A to Z, and the collections of her own cartoons The Party After You Left and Theories of Everything. She is the editor of The Best American Comics 2016 and the illustrator of Calvin Trillin's No Fair! No Fair! and Daniel Menaker's The African Svelte, all published in Fall 2016.

Patricia Marx has been contributing to The New Yorker since 1989. She is a former writer for “Saturday Night Live” and “Rugrats,” and is the author of several books, including Let's Be Less Stupid, Him Her Him Again The End of Him, and Starting from Happy. Marx was the first woman elected to the Harvard Lampoon. She has taught at Princeton, New York University, and Stonybrook University. She is recipient of a Guggenheim Fellowship.