The Kebra Nagast: The Lost Bible of Rastafarian Wisdom and Faith (The Essential Wisdom Library) (Paperback) 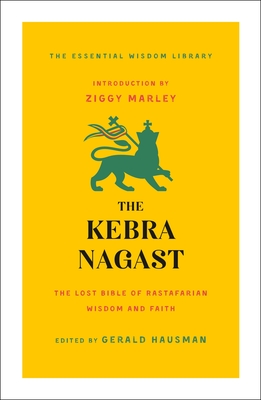 The Kebra Nagast: The Lost Bible of Rastafarian Wisdom and Faith (The Essential Wisdom Library) (Paperback)

The Kebra Nagast is a pivotal text in the Rastafarian tradition. Written in Ethiopia during the 14th century, this sacred tale tells the story of the relationship between the Biblical King Solomon and the Queen of Sheba, as well as their son Menyelek who famously brought the Arc of the Covenant to Ethiopia. A key text for Ethiopian Christians, The Kebra Nagast is also a fundamental sacred work of the Rastafarian tradition.

Edited by Gerald Hausman, The Kebra Nagast: The Lost Bible of Rastafarian Wisdom and Faith weaves the core passages of the Kebra Nagast together with stories and tale from Rastafarian traditions. This rich retelling is the latest title in the acclaimed Essential Wisdom Library series which brings sacred texts from all traditions to modern readers. The new edition of the book includes a foreword by Ziggy Marley, which explores the importance of the Kebra Nagast as a powerful text both in Rastafarian tradition and in a broader sense. A clean, fresh design and inside cover printing give this ancient text modern appeal.

A work of incredible cultural significance, The Kebra Nagast is far more than simply a piece of literature, but rather it is a testament to enduring richness of Ethiopian tradition and culture.

Gerald Hausman calls himself a "native of the world" after living in so many places in the United States and the West Indies. His more than 70 books attest to his love of folklore. During his thirty-five years as a storyteller, Gerald has entertained children of all ages at such places as The Kennedy Center, Harvard University, St John's College and in schools from one end of the country to the other.