Gizmos, Gadgets, and Guitars: The Story of Leo Fender (Hardcover) 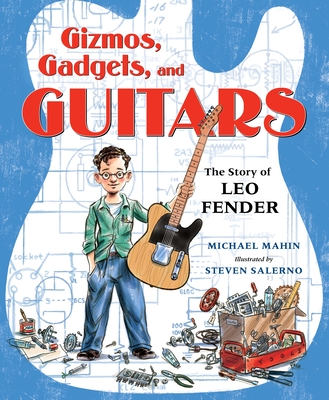 Gizmos, Gadgets, and Guitars: The Story of Leo Fender (Hardcover)

Leo Fender loved to thinker and tinker and take things apart and put them back together again. When he lost an eye in a childhood accident, he refused to think of himself as broken. With a new pair of magnifying glasses, Leo got back to doing what he loved, fixing machines big and small—even broken instruments.
His inventions—which included the Telecaster and the Stratocaster—would inspire the rock ’n’ roll generation and go on to amplify the talents of legendary guitarists Muddy Waters, Jimi Hendrix, Eric Clapton, and Bonnie Raitt, among others. Fender’s brilliant engineering vision connected science and art forever.

Michael Mahin is the author of many award-winning picture book biographies, including Muddy: The Story of Blues Legend Muddy Waters, which was an NPR Best Book of the Year, a New York Times Best Illustrated Book, and a Parents’ Choice Gold Award; as well as When Angels Sing: The Story of Rock Legend Carlos Santana, recipient of the Pura Belpré Illustrator Honor and Robert F. Sibert Honor, among others. He lives in San Diego, California.

Steven Salerno has illustrated more than twenty picture books, including Brothers At Bat, which made the New York Times Book Review's list of notable picture books for 2012, BOOM!, and Coco the Carrot. A graduate of Parsons School of Design, he lives in New York City.