You're Dad: A Little Book for Fathers (And the People Who Love Them) (Hardcover) 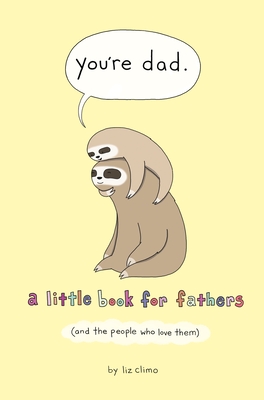 You're Dad: A Little Book for Fathers (And the People Who Love Them) (Hardcover)

From new dads to those who’ve been around the block, dads who go to work to those who are at home, and all the dads in between, You're Dad is a touching tribute to fathers everywhere.

With humor, heart, and adorable drawings, Liz Climo celebrates fatherhood in all its shapes and sizes (and species). Featuring different types of dads and the paths they can travel, Climo’s whimsical animal illustrations take us through the adventures of fatherhood, commemorating the laughter and the tears as well as the stumbles and the triumphs.

Perfect for dads, the dad-like, any and all parents, and the people who love them, this sweet collection of fatherly love will move and delight.

Liz Climo is a cartoonist, children’s book author, illustrator, and animator. She grew up in the San Francisco Bay Area and moved to Los Angeles after college to work as a character artist on The Simpsons. She is the author of the Rory the Dinosaur series, The Little World of Liz Climo, Lobster Is the Best Medicine, Please Don't Eat Me!, and Best Bear Ever!. Her books have been translated into ten languages and have sold millions of copies worldwide. She lives in Los Angeles with her husband and daughter.