Last Call at Coogan's: The Life and Death of a Neighborhood Bar (Hardcover) 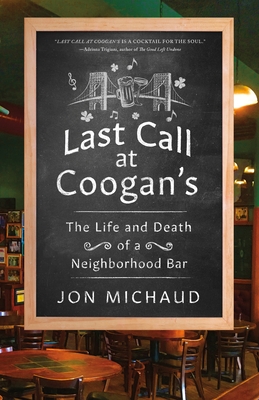 Last Call at Coogan's: The Life and Death of a Neighborhood Bar (Hardcover)

The uniquely inspiring story of a beloved neighborhood bar that united the communities it served.

Coogan’s Bar and Restaurant opened in New York City’s Washington Heights in 1985 and closed its doors for good in the pandemic spring of 2020. Sometimes called Uptown City Hall, it became a staple of neighborhood life during its 35 years in operation—a place of safety and a bulwark against prejudice in a multi-ethnic, majority-immigrant community undergoing rapid change.

Last Call at Coogan’s by Jon Michaud tells the story of this beloved saloon, from the challenging years of the late 80's and early 90's, when Washington Heights suffered from the highest crime rate in the city, to the 2010’s, when gentrification pushed out longtime residents and nearly closed Coogan's itself; only a massive community mobilization led by superstar Lin-Manuel Miranda and local politicians kept the doors open.

This book touches on many serious issues facing the country today: race relations, policing, gentrification, and the COVID-19 pandemic. Along the way, readers will meet the bar’s owners and an array of its most colorful regulars, such as an aspiring actor from Kentucky who dreams of bringing a theater company to Washington Heights, a television reporter who loves karaoke, and a Puerto Rican community board manager who falls in love with an Irish cop from the local precinct. At its core, this is the story of one small business, the people who worked there, the customers they served, and the community they all called home.

JON MICHAUD is the Collection Management Librarian at the Millburn Free Public Library. His debut novel When Tito Loved Clara (Algonquin) was named a best book of the year by The Barnes & Noble Review and was a finalist for the Writer’s Center First Novel Prize. Michaud was the head librarian at The New Yorker from 2003-2012 and the head librarian at the Center for Fiction from 2015-2017. His writing has appeared in The New Yorker, The Washington Post, Tin House, LitHub, CrimeReads, and numerous other publications. The recipient of a 2022 fellowship from the New Jersey Council on the Arts, Michaud lives in Maplewood, NJ with his wife and two sons. An American citizen, he was nonetheless the Irish junior javelin champion in 1983.