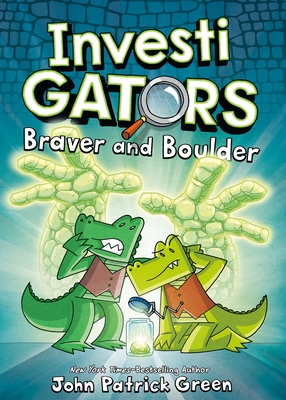 This is book number 5 in the InvestiGators series.

The InvestiGators’ latest case has our sewer-loving secret agents between a rock and a hard place in InvestiGators: Braver and Boulder, the latest chapter in the hilarious New York Times bestselling adventure graphic novel series from John Patrick Green.

The InvestiGators are having a hard time keeping a low profile with their new headquarters being a giant robot towering over the city! How can they be SECRET agents if everyone recognizes them?

But with their ears to the ground, Mango and Brash hear mysterious rumblings about BOULDER BUDDIES...are they just the latest fad or part of a mob-run scheme? And could a rocky relationship from the InvestiGators’ past be trembling beneath the surface? Find out in their most stone-cold dangerous mission yet!

John Patrick Green is a human with the human job of making books about animals with human jobs, such as Hippopotamister, Kitten Construction Company, and InvestiGators. John is definitely not just a bunch of animals wearing a human suit pretending to have a human job. He is also the artist and co-creator of the graphic novel series Teen Boat!, with writer Dave Roman. John lives in Brooklyn in an apartment that doesn't allow animals other than the ones living in his head.