InvestiGators: Ants in Our P.A.N.T.S. (Hardcover) 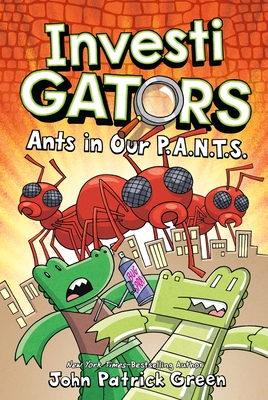 InvestiGators: Ants in Our P.A.N.T.S. (Hardcover)

This is book number 4 in the InvestiGators series.

Will InvestiGators Mango and RoboBrash be able to solve this next mystery in the hilarious adventure series perfect for fans of Dog Man?!

The InvestiGators’ new mission has our sewer-loving secret agents bugging out in InvestiGators: Ants in Our P.A.N.T.S, the latest chapter in the hilarious adventure series from John Patrick Green.

With agent Brash trapped in a mysterious coma, the technicians at S.U.I.T. have designed the ultimate replacement: RoboBrash! This high-tech replica has been programmed with all of the original Brash’s crime-fighting skills and knowhow—but it seems he’s got a few bugs in his system! Will Mango and his new partner be enough to stop the giant ants that are on a rampage in the city? Orchestrated by the spaced-out villain, Maestronaut, and Houdino, the dinosaur escape artist, it seems criminals are certainly upping the ANT-y!

John Patrick Green is a human with the human job of making books about animals with human jobs, notably the smash-hit graphic novel series InvestiGators. John is definitely a multiple New York Times-bestselling human author and not just a bunch of animals in a trench coat pretending to have a human job. With over a million copies of InvestiGators in print, John is a successful human being with only two hands and a normal amount of fur. He lives in a Brooklyn apartment that doesn't allow animals other than the ones living in his head.