Science Comics: Rocks and Minerals: Geology from Caverns to the Cosmos (Paperback) 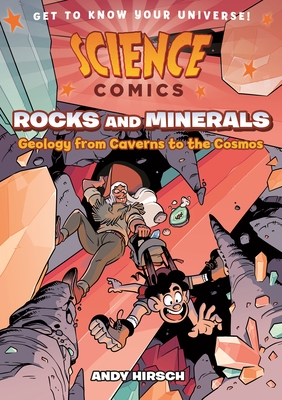 Science Comics: Rocks and Minerals: Geology from Caverns to the Cosmos (Paperback)

In this volume, join a crystal-crazy fanboy and a famous rock hunter on a geological journey that will take them to the summit of a volcano, deep within the earth, and even into outer space! They'll learn about the unstoppable forces that shape our planet and they might even pick up a gemstone or meteorite along the way.

Every volume of Science Comics offers a complete introduction to a particular topic—dinosaurs, the solar system, volcanoes, bats, robots, and more! Whether you're a fourth grader doing a natural science unit at school or a thirty-year-old with a secret passion for airplanes, these graphic novels are for you!

Andy Hirsch is a cartoonist living in Dallas, Texas. He is the author and illustrator of several entries in First Second's Science Comics series, including Dogs: From Predator to Protector, Trees: Kings of the Forest, and Cats: Nature and Nurture.

"A rock-solid review for serious students of our planet’s story, infused with humor and wonder."—School Library Journal, starred review


Praise for the Science Comics series:

"This series—written by a handful of authors—seems determined to offer a useful introduction to anything a curious grade-school student might wonder about. The insight behind these books is a powerful one. So much information about the world around us is actually better conveyed visually, through charts, illustrations, and sequential panels, than purely using words." —New York Times

"Like having a Time Life Science Library in comic books. Which is awesome!" —Popular Science