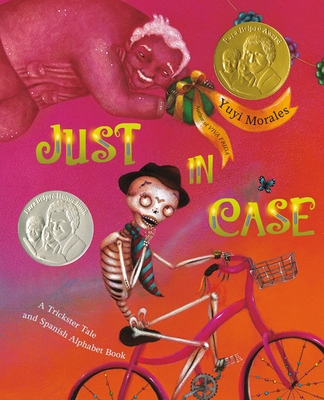 Yuyi Morales takes us on a new journey with Señor Calvera, the skeleton from Day of the Dead celebrations. Señor Calvera is worried. He can't figure out what to give Grandma Beetle for her birthday. Misunderstanding the advice of Zelmiro the Ghost, Señor Calvera decides not to get her one gift, but instead one gift for every letter of the alphabet, just in case.

Una Acordéon: An accordion for her to dance to.
Bigotes: A mustache because she has none.
Cosquillas: Tickles to make her laugh . . .

. . . only to find out at the end of the alphabet that the best gift of all is seeing her friends. Morales's art glows in this heart-warming original tale with folklore themes, a companion book to her Pura Belpré-winning Just a Minute.

In English with Spanish vocabulary words

Yuyi Morales is an author/illustrator whose books have won the Pura Belpré Award, the Christopher Award, and the Jane Addams Award. She lives in northern California. Her books include Just In Case, Viva Frida, and Little Night/Nochecita.

Yuyi Morales is an author/illustrator whose books have won the Pura Belpré Award, the Christopher Award, and the Jane Addams Award. She lives in northern California. Her books include Just In Case, Viva Frida, and Little Night/Nochecita.

"Richly hued and filled with action, the illustrations capture the tale’s humor and Latin flavor perfectly, leading on to an entirely logical, hilarious and heartwarming surprise at the end. As gifted an artist as she is a storyteller, Morales is in top form here." —Kirkus Reviews, starred review

"[A] breezily told tale, rich in Spanish vocabulary and Mexican atmosphere. The alphabetically ordered collected presents are cleverly integrated into the double pages, each with a different color background. Each spread includes amusing details to study in the fantasy-like but clearly painted illustrations." -Children's Literature

"Part ghost story and part alphabet book, this trickster tale transcends both. Librarians will want to share it for the beautiful language, the spirited artwork, and the rightness of the ending." —School Library Journal