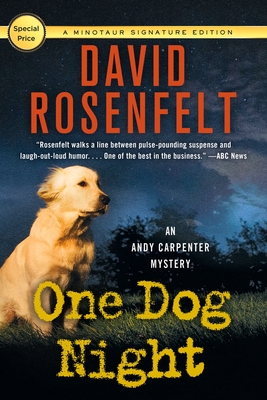 This is book number 9 in the An Andy Carpenter Novel series.

Lawyer Andy Carpenter will have to pull out all of his tricks to get to the bottom of this cold case turned white hot in One Dog Night, the latest in David Rosenfelt's popular mystery series.

For six years Noah Galloway has lived with a horrible secret and the fear that his rebuilt life could be shattered at any moment. Now his dread has become a certainty, and he has been arrested for the arson murder of twenty-six people.

What he needs is defense lawyer Andy Carpenter, who most definitely is not in the market for a new client. So Noah plays his hole card: a shared love for Andy’s golden retriever, Tara, and the knowledge that Andy wasn’t her first owner—Noah rescued Tara first. When Noah wasn’t able to care for her any longer, he did everything in his power to make sure that she was placed in the right home: Andy’s.

Andy soon learns that the long-ago event that may destroy Noah’s life is only the beginning of an ongoing conspiracy that grows more deadly by the day.

*BONUS CONTENT: This edition of One Dog Night includes a new introduction from the author and a discussion guide

DAVID ROSENFELT is the Edgar-nominated and Shamus Award-winning author of more than twenty Andy Carpenter novels, including One Dog Night, Collared, and Deck the Hounds; its spinoff series, The K-Team; the Doug Brock thriller series, which starts with Fade to Black; and stand-alone thrillers including Heart of a Killer and On Borrowed Time. Rosenfelt and his wife live in Maine with an ever-changing pack of rescue dogs. Their epic cross-country move with 25 of these dogs, culminating in the creation of the Tara Foundation, is chronicled in Dogtripping.

Praise for One Dog Night

“Rosenfelt walks a line between pulse-pounding suspense and laugh-out-loud humor… One of the best in the business.”—Associated Press

“A blessed anomaly in crime fiction… Andy is like a gulp of cold water on a steamy day… Rosenfelt peels back the layers of puzzlement ever so skillfully, tantalizing us throughout until, finally, both Andy and the reader are enlightened, simultaneously. A gem.”—Booklist (starred review)

“Winning… Andy does his usual sterling—and amusing—performance in the courtroom... [It] will keep readers turning the pages.”—Publishers Weekly