Republic of Lies: American Conspiracy Theorists and Their Surprising Rise to Power (Hardcover) 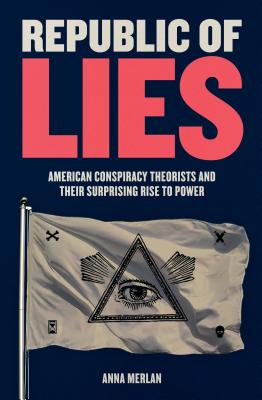 Republic of Lies: American Conspiracy Theorists and Their Surprising Rise to Power (Hardcover)

A riveting tour through the landscape and meaning of modern conspiracy theories, exploring the causes and tenacity of this American malady, from Birthers to Pizzagate and beyond.

American society has always been fertile ground for conspiracy theories, but with the election of Donald Trump, previously outlandish ideas suddenly attained legitimacy. Trump himself is a conspiracy enthusiast: from his claim that global warming is a Chinese hoax to the accusations of “fake news,” he has fanned the flames of suspicion.

But it was not by the power of one man alone that these ideas gained new power. Republic of Lies looks beyond the caricatures of conspiracy theorists to explain their tenacity. Without lending the theories validity, Anna Merlan gives a nuanced, sympathetic account of the people behind them, across the political spectrum, and the circumstances that helped them take hold. The lack of a social safety net, inadequate education, bitter culture wars, and years of economic insecurity have created large groups of people who feel forgotten by their government and even besieged by it. Our contemporary conditions are a perfect petri dish for conspiracy movements: a durable, permanent, elastic climate of alienation and resentment. All the while, an army of politicians and conspiracy-peddlers has fanned the flames of suspicion to serve their own ends.

Anna Merlan is a journalist specializing in politics, crime, religion, subcultures, and women’s lives. She is a reporter at the Special Projects Desk, the investigative division of Gizmodo Media Group. She was previously a senior reporter at Jezebel and staff writer at the Village Voice and the Dallas Observer. She lives in New York.

“A captivating book that illuminates the landscape of conspiracy theories and what they might say about society as a whole.”
—New York Magazine

“A frequently jaw-dropping, yet deeply sensitive and curious, journey through some of the most pervasive conspiracy theories in America today.”
—Huffington Post

“Merlan approaches conspiracy theories and the people who believe them as a thoughtful, thorough journalist, looking at how those in power wield them at the expense of those who are destabilized and looking for answers. An amazing read.”
—Corinne Segal, Literary Hub

“A fascinating perspective on the current political era.”
—Refinery29

"Merlan’s deeply researched, brilliantly synthesized . . . book carrie[s] warnings about the ways disinformation filters into the sphere of legitimate public discourse . . . Her message is chilling but it makes the case—and the space—for hope: if these harms were co-created, so too might be their solutions."
—Sarah Krasnostein’s, Literary Hub

“[Merlan] is one of the sharpest reporter/commentators in the game.”
—Flavorwire

“Engrossing assessment of the profitable mainstreaming of conspiracy mongering in civic and political life … A lucid look at a slippery topic.”
—Kirkus