Brave Ballerina: The Story of Janet Collins (Who Did It First?) (Hardcover) 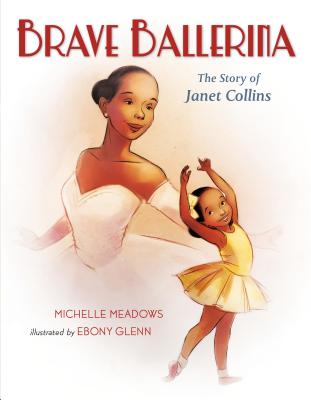 Brave Ballerina: The Story of Janet Collins (Who Did It First?) (Hardcover)

Janet Collins wanted to be a ballerina in the 1930s and 40s, a time when racial segregation was widespread in the United States. Janet pursued dance with a passion, despite being rejected from discriminatory dance schools. When she was accepted into the Ballet Russe de Monte Carlo as a teenager on the condition that she paint her skin white for performances, Janet refused. She continued to go after her dreams, never compromising her values along the way. From her early childhood lessons to the height of her success as the first African American prima ballerina in the Metropolitan Opera, Brave Ballerina is the story of a remarkable pioneer as told by Michelle Meadows, with fantastic illustrations from Ebony Glenn.

Michelle Meadows is the author of Hibernation Station, Piggies in Pajamas, and Super Bugs. She dances with her husband as much as possible. She lives in Delaware and loves to write at the beach.

Ebony Glenn is an Atlanta-based illustrator and proud recipient of the 2018 Wonders of Childhood Focus Fellowship. She has illustrated books including Brave Ballerina, Not Quite Snow White, and Mommy's Khimar.

"This is a wonderful and inspirational biography for aspiring young dancers and other athletes." —The Washington Post

"Collins’s story is told masterfully. . . Glenn fills each page with the strength and beauty of dance, focusing on the graceful movement of Collins and her emotive expressions. This book radiates with the joy of dance. A first purchase for most collections."--School Library Journal, starred review

"The digital illustrations have the look of pen drawings, rendering a graceful dancer's body with glowing brown skin and a self-possessed face. . . A celebration of one black woman's achievements that underscores the passion and purpose that the human spirit has to offer."--Kirkus Reviews

"Glenn illustrates in warm yet muted digital art; dynamic spreads show Collins dancing in a red flamenco dress to the sounds of a jazz ensemble. In a final spread, Collins dances at the Metropolitan Opera House in 1951—becoming the first African-American prima ballerina to do so. Meadows offers readers an affectionate biographical story that emphasizes her subject’s passion and determination."--Publishers Weekly