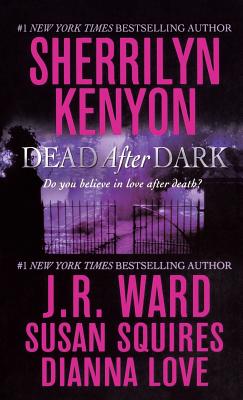 "Shadow of the Moon"

Angelia has fought her entire life to make herself strong. Now, with her patria under fire, she has to protect her people from Fury and his werewolf clan. Vowing to bring him to justice, Angelia sets out alone...until the hunter becomes the hunted, and the only way for her to survive is to trust the very wolf she's sworn to kill.

"The Story of Son"

Claire Stroughton is a beautiful lawyer who would rather spend the night with a legal brief than the man of her dreams. Then a routine client meeting turns dangerous--and deeply sensual--when she is held captive by a gorgeous man with an unworldly hunger...

When Drew Carlowe returns home to win back a lost love, he is quick to dismiss rumors that his estate is haunted by a stunning young ghost...until one passionate encounter leaves him mystified--and aching for more.

Trey McCree possesses an insatiable desire for Sasha Armand--and supernatural powers that could endanger her life as a human. But when they team up to stop an evil warlord, Trey discovers that Sasha can do way more than

In the past two years, New York Times bestselling author Sherrilyn Kenyon has claimed the #1 spot twelve times, and since 2004, she has placed more than 50 novels on the New York Times list. This extraordinary bestseller continues to top every genre she writes. With more than 23 million copies of her books in print in over 30 countries, her current series include: The Dark-Hunters, The League, Lords of Avalon, BAD Agency, Chronicles of Nick and Nevermore. A preeminent voice in paranormal fiction, Kenyon helped pioneer and define the current paranormal trend that has captivated the world. She lives with her husband, three sons, a menagerie of animals and a collection of swords.J.R. Ward is a #1 New York Times bestselling author of erotic paranormal romance. She lives in the South with her incredibly supportive husband and her beloved golden retriever. After graduating from law school, she began working in healthcare in Boston and spent many years as Chief of Staff of one of the premier academic medical centers in the nation. Writing has always been her passion; her idea of heaven is a whole day of nothing but her computer, her dog, and her coffee pot. As part of one of many mid-life crises, New York Times bestselling author Susan Squires began writing professionally while still working as an executive at a Fortune 500 company. She still uses tales of romance and adventure to escape budgets and projects. She researches and writes her books at the beach in Southern California, supported by two Belgian Sheepdogs, a warmblood mare, and a wonderful husband named Harry who writes occult mysteries as H.R. Knight. Dianna Love loves the outdoors and has a passion for fishing and motorcycle riding. She has even water-skiied, scuba divied, snow-skiied, and skydived. She received a RITA award for Best Long Contemporary in 2006. Dianna lives near Atlanta, Georgia with her husband.