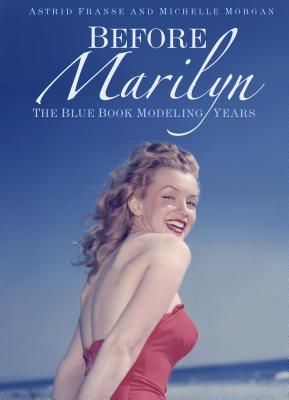 Before Marilyn tells the story of Marilyn Monroe's modelling career, during which time she was signed to the famous Blue Book Agency in Hollywood. The head of the agency, Miss Emmeline Snively, saw potential in the young woman and kept detailed records and correspondence throughout their professional relationship and beyond.
On the day of Monroe's funeral, Snively gave an interview from her office, talking about the girl she had discovered, before announcing, rather dramatically, that she was closing the lid on her Marilyn Monroe archive that day - to 'lock it away forever'.
This archive was purchased by Astrid Franse, and together with bestselling Marilyn Monroe biographer Michelle Morgan they draw on this collection of never-before-seen documents, letters and much, much more.
Before Marilyn explores an aspect of Monroe's life that has never been fully revealed - by charting every modelling job she did, and illustrating the text with rare and unpublished photographs of the young model and her mentor.

Astrid Franse began her career as a model, teacher and actress and has been the owner of Bennies Fifties USA collectables shop for the past thirtyfive years. Fifty years after Marilyn's death, Astrid discovered that she owned a box containing Marilyn Monroe's Blue Book Model Agency Archive whilst buying items for Bennies Fifties. She bought the box without any knowledge of the contents. Two decades later, because of interest in the Marilyn collectibles, Astrid started organising the box and was stunned to discover that it once belonged to Miss Emmeline Snively, the president of the model agency. The announcement made world news and she was interviewed for television, radio, newspapers and the Internet.

Michelle Morgan is the author of Marilyn's Addresses (Smith Gryphon, 1995), Marilyn Monroe: Private and Undisclosed (Robinson, 2012), The Mammoth Book of Hollywood Scandals (Robinson, 2013), The Ice Cream Blonde: The Whirlwind Life and Mysterious Death of Screwball Comedienne Thelma Todd (Chicago Review Press, 2015) and Madonna (Robinson/Little, Brown, 2015). Michelle has written frequently for magazines, and wrote a weekly newspaper column from 2007 to 2014. She has been interviewed on radio and television on numerous occasions, with appearances including The Alan Titchmarsh Show, The One Show, BBC National News, Sky News, and Collector's Lot.
"The images of innocence and loveliness among these 200 photographs can break your heart if you’ve got one." —The Buffalo News