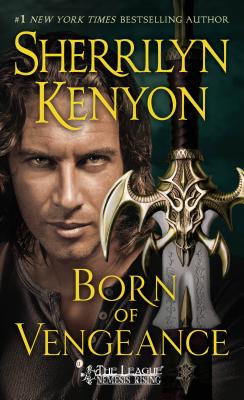 This is book number 10 in the The League: Nemesis Rising series.

Welcome back to the blockbuster bestselling author Sherrilyn Kenyon’s world of the League with Born of Vengeance, where destiny and danger collide. . .

Bastien Cabarro survived the brutal slaughter of his entire family only to have his wife pin their murders on him. Made Ravin by The League, he is now a target for their assassins-in-training to hunt and kill. The average life expectancy for such beings is six weeks. But defying the odds is what this Gyron Force officer does best—and Bastien won’t rest until he lays his betrayers in their graves.

Ten years later, Bastien has one chance to strike back, provided he relies on his former wingman—the very sister of the woman who testified against him. Major Ember Wyldestarrin joined the outlaw Tavali the day Kirovar fell to a tyrant, and she and her team were left to die under the barrage of enemy fire. Today, Ember vows revenge on those who murdered her parents and forced her and her sisters into exile. But joining forces with Bastien comes with a cost—and an attraction too dangerous for their own good. Is it worth the fight if losing means a fate worse than death?

“The most in-demand and prolific author in America these days.”—Publishers Weekly

New York Times bestselling author Sherrilyn Kenyon is a regular in the #1 spot. This extraordinary bestseller continues to top every genre in which she writes, including manga and graphic novels. More than 70 million copies of her books are in print in more than one hundred countries. Her current series include The Dark Hunters®, The League®, Deadman’s Cross™, Chronicles of Nick®, Hellchasers™, Mikro Chasers™, and The Lords of Avalon®. Her Chronicles of Nick® and Dark-Hunter® series are soon to be major motion pictures.