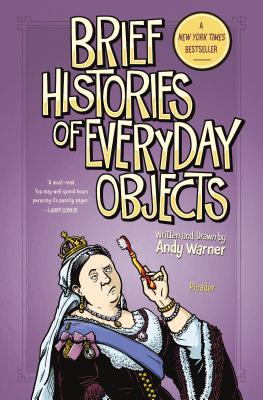 Hilarious, entertaining, and illustrated histories behind some of life's most common and underappreciated objects - from the paperclip and the toothbrush to the sports bra and roller skates

Brief Histories of Everyday Objects is a graphic tour through the unusual creation of some of the mundane items that surround us in our daily lives. Chapters are peppered with ballpoint pen riots, cowboy wars, and really bad Victorian practical jokes. Structured around the different locations in our home and daily life—the kitchen, the bathroom, the office, and the grocery store—award-nominated illustrator Andy Warner traces the often surprising and sometimes complex histories behind the items we often take for granted. Readers learn how Velcro was created after a Swiss engineer took his dog for a walk; how a naval engineer invented the Slinky; a German housewife, the coffee filter; and a radical feminist and anti-capitalist, the game Monopoly. This is both a book of histories and a book about histories. It explores how lies become legends, trade routes spring up, and empires rise and fall—all from the perspective of your toothbrush or toilet.

ANDY WARNER's comics have been published by Slate, Medium, American Public Media, Symbolia, popsci.com, Showtime's Years of Living Dangerously, the Center for Constitutional Rights, the United Nations Refugee and Works Agency, Generation Progress, UNICEF, BuzzFeed, and Upworthy. He is the cofounder and coeditor of Irene.He writes and draws in a garden shed in San Francisco, and he lives in Berkeley and comes from the sea. He is the author of Brief Histories of Everyday Objects.

"The most delightfully irreverent illustrated history lesson since Larry Gonick’s Cartoon History of the Universe (1990)."—Booklist

“Andy Warner has sparked my curiosity about microwave ovens and piqued my taste for cinnamon with this remarkable book. Brief Histories of Everyday Objects combines scholarship, wit, and some of the best gray-scale design I’ve ever seen in a comic book.” —Larry Gonick, author of The Cartoon History of the Universe

"Ever wonder how the postcard, the bathtub, the ballpoint pen, the microwave, or kitty litter came to be? Warner has you covered with fun and quick backgrounds on objects we take for granted today."—io9

“[Andy Warner is] equally interested in the chaos that often follows entrepreneurial initiatives, and each strip, though brief, has the power of a parable, outlining how some inventors were cheated, fell into greed, or used their wealth to attempt to fund new, even quirkier endeavors…. Warner is a deft cartoonist, able to convey a lot of information, humor, and emotion within a single panel.”—Publishers Weekly