Inside Marine One: Four U.S. Presidents, One Proud Marine, and the World’s Most Amazing Helicopter (Paperback) 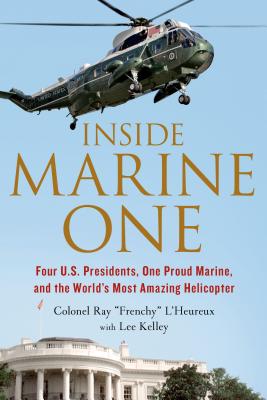 Inside Marine One: Four U.S. Presidents, One Proud Marine, and the World’s Most Amazing Helicopter (Paperback)

Col. Ray "Frenchy" L'Heureux always dreamed of bring a pilot. Growing up, he built airplane models and dreamed about soaring over the earth. When he was twelve, his mom treated him to a flying lesson at the local airfield. Taken on a short flight by an instructor and allowed to operate the controls for part of the flight, he was hooked forever. It wasn't until he was running low on college funds and saw a recruiter at his college that he joined the Marines and began the journey towards his dream from Parris Island to Bravo Company and, then, officer training school. One day at an airfield when President Reagan landed on this way to a fundraiser, Frenchy's life changed forever when encountered HMX1, the squadron that flies the President in Marine One. When he saw the white-topped Sea King and White Hawk helicopters, he was determined to become part of that elite group. Inside Marine One is Col. L'Heureux's inspiring story of a young man who dreamed of flying, trained, studied and worked hard to become the pilot who ended up serving four US Presidents - George H.W. Bush, Bill Clinton, George W. Bush and Barack Obama. It's also a personal guided tour inside the world's most famous helicopter by a man who knows that flying machine better than any other. Inside Marine One is a great American success story of a young boy who dreamed big, worked hard and finally flew the President of the United States as his number one passenger.

LEE KELLEY is a writer, former Army Captain and Iraq war veteran. He is the author of three books including A Life Well-Built and has written for The New York Times. He lives with his wife and three children in Utah.