All Creatures Great and Small: The Warm and Joyful Memoirs of the World's Most Beloved Animal Doctor (Paperback) 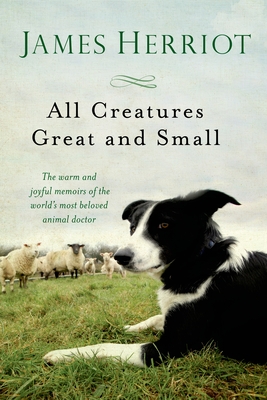 All Creatures Great and Small: The Warm and Joyful Memoirs of the World's Most Beloved Animal Doctor (Paperback)

Delve into the magical, unforgettable world of James Herriot, the world's most beloved veterinarian, and his menagerie of heartwarming, funny, and tragic animal patients.

For over forty years, generations of readers have thrilled to Herriot's marvelous tales, deep love of life, and extraordinary storytelling abilities. For decades, Herriot roamed the remote, beautiful Yorkshire Dales, treating every patient that came his way from smallest to largest, and observing animals and humans alike with his keen, loving eye.

In All Creatures Great and Small, we meet the young Herriot as he takes up his calling and discovers that the realities of veterinary practice in rural Yorkshire are very different from the sterile setting of veterinary school. Some visits are heart-wrenchingly difficult, such as one to an old man in the village whose very ill dog is his only friend and companion, some are lighthearted and fun, such as Herriot's periodic visits to the overfed and pampered Pekinese Tricki Woo who throws parties and has his own stationery, and yet others are inspirational and enlightening, such as Herriot's recollections of poor farmers who will scrape their meager earnings together to be able to get proper care for their working animals. From seeing to his patients in the depths of winter on the remotest homesteads to dealing with uncooperative owners and critically ill animals, Herriot discovers the wondrous variety and never-ending challenges of veterinary practice as his humor, compassion, and love of the animal world shine forth.

James Herriot's memoirs have sold 80 million copies worldwide, and continue to delight and entertain readers of all ages.

James Herriot (1916-1995) was the bestselling author of memoirs including All Creatures Great and Small, All Things Bright and Beautiful, All Things Wise and Wonderful, The Lord God Made Them All, and Every Living Thing. At age 23, Herriot qualified for veterinary practice with the Glasgow Veterinary College, and moved to the town of Thirsk in Yorkshire to work in a rural practice. He would live in, work in, and write about the region for the rest of his life. Though he dreamed for years of writing a book, his veterinary work and his family kept him busy, and he did not start writing until the age of 50. In 1979, he was awarded the title Order of the British Empire (OBE). His veterinary practice in Yorkshire, England, is now tended by his son, Jim Wight.

“Absolutely super, a rarity, magnificently written, insightful, unforgettable. . . . If you have ever loved a friend, human or otherwise, this is the book for you.” —Houston Chronicle

“One of the funniest and most likeable books around.” —The Atlantic Monthly

“[Herriot] is the most entertaining, most thoroughly likeable, most engaging person to have come along in a long time, and the stories he has to tell are fascinating.” —The Washington Post

“If there is any justice, All Creatures Great and Small will become a classic of its kind . . . With seemingly effortless art, this man tells his stories with perfect timing and optimum scale. Many more famous authors could work for a lifetime and not achieve more flawless literary control.” —Chicago Tribune Book World

“Herriot charms because he delights in life, embraces it with sensitivity and gust and writes with grace. All Creatures Great and Small may well be the happiest book of the year.” —The New York Times Book Review

“Absolutely super, a rarity, magnificently written, insightful, unforgettable . . . If you have ever loved a friend, human or otherwise, this is the book for you.” —Houston Chronicle

“Refreshingly original . . . as close to a novel as a chronicle of memoirs could be . . . hilarious, touching, athletic and warming . . . Dr. Herriot's characters . . . rival any from British fiction.” —Los Angeles Times

“James Herriot . . . is one of those rare men who know how to appreciate the ordinary . . . a natural storyteller.” —The New York Times

“Warm, anecdotal . . . All Creature Great and Small makes you feel good about the worried and some of the people in it.” —San Francisco Chronicle

“What the world needs now, and does every so often, is a warm, G-rated, down-home, unadrenalized prize of a book that sneaks onto the bestseller lists . . . James Herriot's memoirs qualify admirably.” —Time

“An inspirational book . . . with all its comedy; tragedy, drama, and farce . . . works like a spring tonic: It lifts the spirits and warms the heart . . . There is no advice, no pat formula for better living. There is just Herriot, a man you cannot resist.” —Chicago Tribune

“Herriot has a real flair for writing and his book is a treat.” —Publishers Weekly