The Love Affairs of Nathaniel P.: A Novel (Paperback) 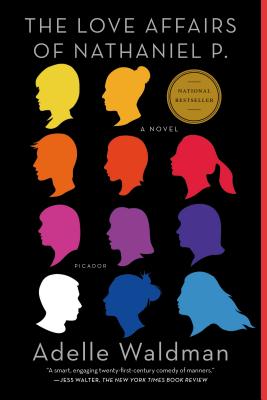 The Love Affairs of Nathaniel P.: A Novel (Paperback)

"Adelle Waldman's debut novel, The Love Affairs of Nathaniel P., scrutinizes Nate and the subculture that he thrives in with a patient, anthropological detachment. Ms. Waldman has sorted and cross-categorized the inhabitants of Nate's world with a witty, often breathtaking precision..."—Maria Russo, The New York Times

A debut novel by a brilliant young woman about the romantic life of a brilliant young man.
Writer Nate Piven's star is rising. After several lean and striving years, he has his pick of both magazine assignments and women: Juliet, the hotshot business reporter; Elisa, his gorgeous ex-girlfriend, now friend; and Hannah, "almost universally regarded as nice and smart, or smart and nice," who holds her own in conversation with his friends. When one relationship grows more serious, Nate is forced to consider what it is he really wants.
In Nate's 21st-century literary world, wit and conversation are not at all dead. Is romance? Novelist Adelle Waldman plunges into the psyche of a flawed, sometimes infuriating modern man—one who thinks of himself as beyond superficial judgment, yet constantly struggles with his own status anxiety, who is drawn to women, yet has a habit of letting them down in ways that may just make him an emblem of our times. With tough-minded intelligence and wry good humor The Love Affairs of Nathaniel P. is an absorbing tale of one young man's search for happiness—and an inside look at how he really thinks about women, sex and love.

Adelle Waldman is a graduate of Brown University and Columbia University's journalism school. She worked as a reporter at the New Haven Register and the Cleveland Plain Dealer, and wrote a column for the Wall Street Journal's website. Her articles also have appeared in The New York Times Book Review, The New Republic, Slate, The Wall Street Journal, and other national publications. She is the author of the novel The Love Affairs of Nathaniel P. She lives in Brooklyn, New York.

“A delectable analysis of contemporary dating.” —The Washington Post

“Nate is almost too real. Mark my words: This book will inspire laughter, chills of recognition, and flights into lesbianism.” —Lena Dunham

“Waldman takes a cliché and turns it on its ear.” —Julie Elliott, Library Journal

“Incisive and very funny...This is an impressive book, full of sharp and amusing observations about urban life, liberal pieties and modern dating....Though Nate has an archetypal quality...Ms. Waldman has skillfully rendered him both fascinating and sympathetic. He is a man of his age, though his strengths and weaknesses are timeless.” —The Economist

“Adelle Waldman's debut novel, The Love Affairs of Nathaniel P., scrutinizes Nate and the subculture that he thrives in with a patient, anthropological detachment. Ms. Waldman has sorted and cross-categorized the inhabitants of Nate's world with a witty, often breathtaking precision...” —Maria Russo, The New York Times

“Adelle Waldman just may be this generation's Jane Austen.” —The Boston Globe

“I inhaled this slim novel; now, I want to go back and read it again, to savor Waldman's mordant take on work, love and cannibalism among the up-and-coming Brooklyn intelligentsia…. The Love Affairs of Nathaniel P. is a sharp and assured tale about a sharp and assured young man, who often acts like a dog.” —Maureen Corrigan, NPR's Fresh Air

“Waldman's brilliant taxonomy of homo erectus brooklynitis. I'm making [my daughter] read The Love Affairs of Nathaniel P. in exchange for paying off her student loans. Not that she'll need much persuading…. Neither chick lit nor lad lit, The Love Affairs... attains something like the universal truths an older female writer articulated by recording the antics of a group of genteel folk in early 19th-century Bath.” —Ron Charles, The Washington Post

“[A] pitch-perfect debut…In the demure tradition of the comedy of manners, Ms. Waldman is rarely mocking or mean-spirited.... A comic performance you shouldn't miss.” —The Wall Street Journal

“A smart, engaging 21st-century comedy of manners in which the debut novelist Adelle Waldman crawls convincingly around inside the head of one Nathaniel (Nate) Piven.” —Jess Walter, The New York Times Book Review

“Fiendishly readable…Most importantly, Waldman gets the big detail right: When it comes to women, Nate's "clamorous conscience" comes into conflict with the exercise of his natural advantages as a single, successful, attractive heterosexual man in a sexual economy that, for him, is very much a buyer's market…. He is misogynistic and ashamed of his misogyny.” —Marc Tracy, The New Republic

“Every so often... a novel comes along that actually deserves the hype. Adelle Waldman's outstanding debut is one of these....It fixes for all time on the page a very particular type of man-- the contemporary up-and-coming literary intellectual.....Psychologically astute, subtle, funny and whip-smart, this is a novel that anyone interested in how we live now should read....With the insinuating sharpness of a stiletto blade, Waldman opens up Nate's interior to show us the mess inside....The level of insight is bracing...On every page of The Love Affairs of Nathaniel P there is something that gives pleasure-- the prose is razor-sharp, the characters in all their pretentions are lovingly skewered. This month's hot novel it may be, but this is a book that will bear repeated readings; funny, angry, subtle and sad, it is the debut of a novelist who's already the real, achieved thing. Highly recommended.” —The Sunday Business Post (London)

“Although the novel is about his love affairs in Brooklyn, this is really a novel that reveals--astutely--how Nate thinks….The book is an exacting character study and Waldman an excellent and witty prose stylist…. [Nate] is a frog in a wax tray, sliced open and pinned back, his innermost private thoughts on display for inspection by the reader….One must read the magical ending to understand that although his thoughts on women will leave many outraged, his dissected frog's heart still beats.” —Jennifer Gilmore, Los Angeles Times

“Waldman has written a book of stately revenge, exposing all that is shallow and oblivious about Nate, and men like him. But it's also a book of beautifully modulated sympathy--for men as well as women....With her eye for social folly in the streets and restaurants of New York, Waldman resembles Edith Wharton.” —Sasha Weiss, NewYorker.com

“A funny and surprisingly sympathetic examination of the romantic sociopathy of youthful litterateurs…Waldman captures smart-enough literary party patter so well… that many of her readers may find themselves squirming in hot-faced recognition…Placed throughout the novel, however, are callbacks to the social literature of the nineteenth century--to George Eliot's work in particular....” —Harper's Magazine

“So much truth in Nathaniel P. that I just can't stop reading it. Oh, it's one hot book….We read fiction for truth. And it's there in Nathaniel P….This is a guy's book. You might classify it as chick lit. You might think it's too narrow, about the Brooklyn literary scene. But the personal is universal. And there's a lot of personal in Nathaniel P. And the only thing that matters is the personal….Read this book.” —Bob Lefsetz, The Lefsetz Letter

“A fabulous book…It's really great….This is such a modern portrait. This guy will be so utterly recognizable to all of us and it's very subtle and I just think a wonderfully written book. I recommend you all get it.” —Hanna Rosin, Slate DoubleX Gabfest

“Smart and enthralling…Waldman's achievement isn't to glorify so much as to dissect, with an uncommonly sharp eye, a minor romantic failure in all its contemporary complexity and evanescent significance.” —San Francisco Chronicle

“[Written] with courage and determination and more than a little bit of moxie.” —Baltimore Sun

“[T]hose who pass on Nathaniel P. will...likely be dating themselves, especially if they're still using Nick Hornby or, worse, John Updike as a guide to the modern male psyche....” —The Plain Dealer (Cleveland)

“Early readers of this novel have already started arguing about how unlikable Piven is, but there's no debating Waldman's success in etching such a fine portrait.” —Jim Higgins, Milwaukee Journal-Sentinel

“We have lately heard ad infinitum the new sensitive literary man's account of his life and times...what we haven't yet heard enough of is the smart literary woman's view of him. With Adelle Waldman's funny, provocative satire…we have a valuable new anthropology of the type....[An] excellent funny novel.” —Katie Roiphe, Slate

“Waldman is a staggeringly talented prose stylist, easy and elegant in every particular, learned, undeceived, and with a dash of sly, quiet humor in nearly every line...” —The Awl

“I basically stayed on the couch for an entire day reading it; I was that riveted by Waldman's ability to get into the brain of Nate Piven.” —Mary Pols, MSN Page-Turner

“[This] lovable antihero quickly becomes irresistible to us...The upshot: a thoroughly, hilariously of-the-moment tale that marvelously captures what it's really like to be young, smart, and looking for love in the big city--from a new writer to watch.” —Elle Magazine

“An honest look inside the head of thirtysomething Nate Piven. It'll have you screaming because you've so dated this guy.” —Glamour Magazine, "The 20 Next Big Things"

“Reminiscent of classic realist novels from authors like Graham Greene or Henry James, this delightful debut jumps headfirst into the mind of one man, revealing what he really thinks about women, dating and success.” —Megan Fishmann, Bookpage

“Written from a dude's POV, this big-hearted yet brutally honest novel about finding love in a big city is a major eye-opener.” —Cosmopolitan Magazine

“The Love Affairs of Nathaniel P. [is] a hilariously astute portrait of a hopelessly self-obsessed Brooklyn writer as a sad young literary man, a Peter Pan for a new, deeply ironic millennium.” —Vogue

“The characters that populate Waldman's world are artistic, creative, funny and intelligent--except when it comes to matters of the heart.” —Kirkus

“An acute study of present-day struggles with intimacy…[Waldman] navigates the male psyche and a highly entertaining hipster mindset, and sneaks in an unexpected, understated ending that brings…a satisfying poignancy.” —Publishers Weekly