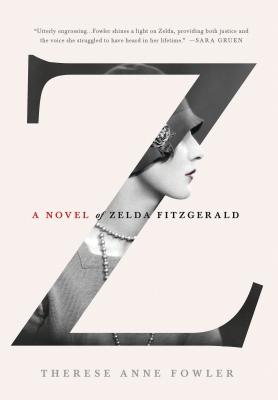 “Z gives voice to a much unknown and misunderstood literary figure. While Scott and Zelda Fitzgerald lead a very public life in many ways, Zelda was often forced to operate in a lifestyle that would make any modern woman squirm with discontent, if not cry out with a vengeance. Fowler breathes life into a voice who very much deserved to be heard in her own time and now. Any lover of the art, literature, and culture of the Jazz Age will not be disappointed with this read.”
— Karl Meutsch, Phoenix Books, Essex, VT

THE INSPIRATION FOR THE TELEVISION DRAMA Z: THE BEGINNING OF EVERYTHING

With brilliant insight and imagination, Therese Anne Fowler's New York Times bestseller Z brings us Zelda's irresistible story as she herself might have told it.

I wish I could tell everyone who thinks we're ruined, Look closer…and you'll see something extraordinary, mystifying, something real and true. We have never been what we seemed.

When beautiful, reckless Southern belle Zelda Sayre meets F. Scott Fitzgerald at a country club dance in 1918, she is seventeen years old and he is a young army lieutenant stationed in Alabama. Before long, the "ungettable" Zelda has fallen for him despite his unsuitability: Scott isn't wealthy or prominent or even a Southerner, and keeps insisting, absurdly, that his writing will bring him both fortune and fame. Her father is deeply unimpressed. But after Scott sells his first novel, This Side of Paradise, to Scribner's, Zelda optimistically boards a train north, to marry him in the vestry of St. Patrick's Cathedral and take the rest as it comes.

What comes, here at the dawn of the Jazz Age, is unimagined attention and success and celebrity that will make Scott and Zelda legends in their own time. Everyone wants to meet the dashing young author of the scandalous novel—and his witty, perhaps even more scandalous wife. Zelda bobs her hair, adopts daring new fashions, and revels in this wild new world. Each place they go becomes a playground: New York City, Long Island, Hollywood, Paris, and the French Riviera—where they join the endless party of the glamorous, sometimes doomed Lost Generation that includes Ernest Hemingway, Sara and Gerald Murphy, and Gertrude Stein.

Everything seems new and possible. Troubles, at first, seem to fade like morning mist. But not even Jay Gatsby's parties go on forever. Who is Zelda, other than the wife of a famous—sometimes infamous—husband? How can she forge her own identity while fighting her demons and Scott's, too?

THERESE ANNE FOWLER is the New York Times bestselling author of A Good Neighborhood, A Well-Behaved Woman, and Z: A Novel of Zelda Fitzgerald. Raised in the Midwest, she migrated to North Carolina in 1995. She holds a B.A. in sociology/cultural anthropology and an MFA in creative writing from North Carolina State University.

“Fowler expertly depicts the rapture of the couple's early love, and later, the bullying and sickness that drove them apart…Z zips along addictively.” —Entertainment Weekly

“A gorgeously rendered piece of literary entertainment, not a biography but rather a love story set in the Jazz Age.” —The Daily News

“A tender, intimate exploration of a complicated woman.” —Library Journal

“Fowler's Zelda is all we would expect and more…once she meets the handsome Scott, her life takes off on an arc of indulgence and decadence that still causes us to shake our heads in wonder…soirées with Picasso and his mistress, with Cole Porter and his wife, with Gerald and Sara Murphy, Gertrude Stein and Alice B. Toklas, Ezra Pound and Jean Cocteau. Scott's friendship with Hemingway verges on a love affair--at least it's close enough to one to make Zelda jealous. Ultimately, both of these tragic, pathetic and grand characters are torn apart by their inability to love or leave each other. Fowler has given us a lovely, sad and compulsively readable book.” —Kirkus Reviews (starred review)

“With lyrical prose, Fowler's Z beautifully portrays the frenzied lives of, and complicated relationship between, Zelda and F. Scott Fitzgerald...This is a novel that will open readers' minds to the life of an often misunderstood woman--one not easily forgotten.” —RT Book Reviews

“A novel that is as heartbreaking as it is mesmerizing. About love, desire, betrayal, and one extraordinary woman struggling to shine in the world--even as the one she loves best is drawing the shades. Just magnificent.” —Caroline Leavitt

“A wonderfully engaging read. With crisp dialogue and vivid descriptions, Z delivers both a compelling love story and a poignant tale of a woman coming into her own as an artist.” —Heidi W. Durrow

“An utterly engrossing portrayal of Zelda Fitzgerald and the legendary circles in which she moved. In the spirit of Loving Frank and The Paris Wife, Therese Anne Fowler shines a light on Zelda instead of her more famous husband, providing both justice and the voice she struggled to have heard in her lifetime.” —Sara Gruen