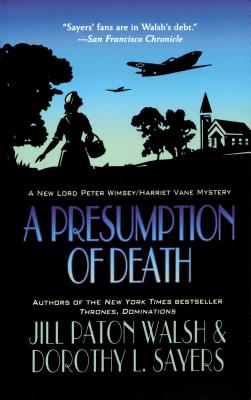 This is book number 2 in the Lord Peter Wimsey/Harriet Vane series.

"Will Paton Walsh do it again?" wondered Ruth Rendell in London's Sunday Times. "We must hope so."

Jill Paton Walsh fulfills those hopes in A Presumption of Death. Although Sayers never began another Wimsey novel, she did leave clues. Drawing on "The Wimsey Papers," in which Sayers showed various members of the family coping with wartime conditions, Walsh has devised an irresistible story set in 1940, at the start of the Blitz in London.

Lord Peter is abroad on secret business for the Foreign Office, while Harriet Vane, now Lady Peter Wimsey, has taken their children to safety in the country. But war has followed them there---glamorous RAF pilots and even more glamorous land-girls scandalize the villagers, and the blackout makes the nighttime lanes as sinister as the back alleys of London. Daily life reminds them of the war so constantly that, when the village's first air-raid practice ends with a real body on the ground, it's almost a shock to hear the doctor declare that it was not enemy action, but plain, old-fashioned murder. Or was it?

At the request of the overstretched local police, Harriet reluctantly agrees to investigate. The mystery that unfolds is every bit as literate, ingenious, and compelling as the best of original Lord Peter Wimsey novels.

Jill Paton Walsh (1937-2020) was an award-winning author of many books for children, young adults, and adults including The Green Book, A Parcel of Patterns, the Booker Prize shortlisted Knowledge of Angels, and the Whitbread Prize winner The Emperor’s Winding Sheet. She completed Dorothy L. Sayers’ unfinished Lord Peter Wimsey and Harriet Vane mystery manuscript, the international bestseller Thrones, Dominations, and continued Sayers’ series with A Presumption of Death, The Attenbury Emeralds, and The Late Scholar. In 1996, Walsh was awarded a CBE (Commander of the Order of the British Empire) for services to literature.