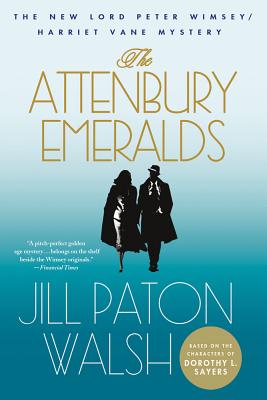 This is book number 3 in the Lord Peter Wimsey/Harriet Vane series.

In 1936, Dorothy L. Sayers abandoned the last Lord Peter Wimsey detective story. Sixty years later, a brown paper parcel containing a copy of the manuscript was discovered in her agent's safe in London, and award-winning novelist Jill Paton Walsh was commissioned to complete it. The result of the pairing of Dorothy L. Sayers with Walsh was the international bestseller Thrones, Dominations.

Now, following A Presumption of Death, set during World War II, comes a new Sayers-inspired mystery featuring Lord Peter Wimsey, revisiting his very first case. . . . It was 1921 when Lord Peter Wimsey first encountered the Attenbury Emeralds. The recovery of the gems in Lord Attenbury's dazzling heirloom collection made headlines—and launched a shell-shocked young aristocrat on his career as a detective.

Thirty years later, a happily married Lord Peter has just shared the secrets of that mystery with his wife, the detective novelist Harriet Vane. Suddenly, the new Lord Attenbury—grandson of Lord Peter's first client—seeks his help to prove who owns the emeralds. As Harriet and Peter contemplate the changes that the war has wrought on English society—and Peter, who always cherished the liberties of a younger son, faces the unwanted prospect of ending up the Duke of Denver after all—Jill Paton Walsh brings us a masterful new chapter in the annals of one of the greatest detectives of all time.

Jill Paton Walsh (1937-2020) was an award-winning author of many books for children, young adults, and adults including The Green Book, A Parcel of Patterns, the Booker Prize shortlisted Knowledge of Angels, and the Whitbread Prize winner The Emperor’s Winding Sheet. She completed Dorothy L. Sayers’ unfinished Lord Peter Wimsey and Harriet Vane mystery manuscript, the international bestseller Thrones, Dominations, and continued Sayers’ series with A Presumption of Death, The Attenbury Emeralds, and The Late Scholar. In 1996, Walsh was awarded a CBE (Commander of the Order of the British Empire) for services to literature.

“Walsh's writing meets the standards of excellence set by Sayers, using the mystery novel as a means to demonstrate that traits of endurance, honestly, and loyalty are always appealing. Wit matched with intelligence marks the soul not only of a good sleuth, but also of the very best mysteries. Watched over by the ghost of Dorothy L. Sayers, The Attenbury Emeralds has soul.” —The Huffington Post

“Author Walsh does a seamless job of carrying on original author Dorothy L. Sayers' sparkling mix of prose and people (and this from a critic who usually hates this sort of thing).” —The Cleveland Plain Dealer

“Walsh successfully recreates the tone and personalities of the originals and plausibly depicts the main characters later in life. Fans of literate period mysteries will clamor for more.” —Publishers Weekly

“We must admit -- heretical as it may be -- that we quite prefer the continuations to the originals.” —Denver Post

“Hundreds of Sherlock Holmes stories have been written by authors other than Conan Doyle. Ian Fleming and Raymond Chandler are others whose deaths did not prevent their fictional creations from continuing to live. Occasionally, such pastiches and homages succeed, but not too often. It's not simply a question of imitating a style of writing. Just as important are a sense of time and place, the language (and slang) of the period, and its social backdrop. And, of course, a hero acceptable to lovers of the original. Jill Paton Walsh, assuming the mantle of Dorothy L. Sayers, convinces on all counts....Sayers would not have recognised that [THE ATTENBURY EMERALDS] wasn't her own work.” —The London Times

“Luckily, Wimsey has Jill Paton Walsh to continue his life, cunningly framing his first case as a remembrance that serves as an origin and an encapsulation….A pitch-perfect Golden Age mystery; not a pastiche but a gem of a period puzzle that belongs on the shelf beside the Wimsey originals.” —The Financial Times (UK)

“If you're a Dorothy L Sayers fan who has been obliged to feed your habit by reading and re-reading the books featuring her aristocratic sleuth Lord Peter Wimsey help is at hand....Fans will be pleased that it is an absolute treat: civilised, intelligent and spellbinding…. Channelling the authority Sayers employed right up to her final book, Walsh shows that she has the full measure of the imperishable Lord Peter and the hyper-intelligent Harriet Vane.” —The Express (UK)