Transformations of the Radical Left in Southern Europe: Bringing Society Back In? (South European Society and Politics) (Paperback) 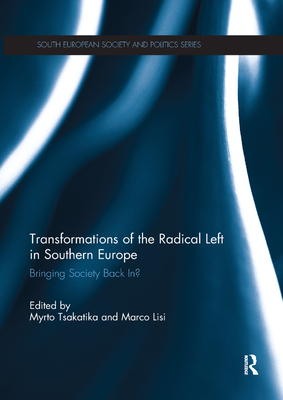 Transformations of the Radical Left in Southern Europe: Bringing Society Back In? (South European Society and Politics) (Paperback)

Political parties are alleged to be turning their backs to civil society; they are said to discourage the active participation of their members and to distance themselves from the privileged relations to affiliated social organisations they once prized. Instead, parties are broadly believed to be directing their efforts towards capturing government office and the resources that come with it, neglecting linkage to their social roots. Transformations of the Radical Left in Southern Europe questions this widely shared view. Exploring the social linkage strategies of the most relevant radical left parties in Portugal, Spain, Italy, Greece and Cyprus in depth, this book demonstrates that the members of the European radical left party family continue to prioritise social linkage, despite their increasingly office-seeking orientation. Between the fall of the Berlin Wall in 1989 and the current economic crisis they have been tirelessly experimenting with diverse new forms of party organisation that have enabled them to return to their social roots. The main lesson drawn from the studies in this book is that party ideology and a party's position in the national political arena go a long way towards explaining the extent to which political parties prioritise social linkage.

This book was published as a special issue of South European Society and Politics.

Myrto Tsakatika is Senior Lecturer at the School of Social and Political Sciences, University of Glasgow, UK. Her main fields of research are European Union governance, South European politics and radical left parties. Her recent publications appear in the Journal of Common Market Studies, the Journal of European Public Policy, Europe-Asia Studies and South European Society and Politics. Marco Lisi is Assistant Professor at the Department of Political Studies, Nova University of Lisbon, Portugal. His research and publications have analysed political parties and voting behaviour, especially in Southern Europe. He has published several articles in international journals such as West European Politics, South European Society and Politics and Representation.