Ismailïa: A Narrative of the Expedition to Central Africa for the Suppression of the Slave Trade Organized by Ismail, Khedive of (Paperback) 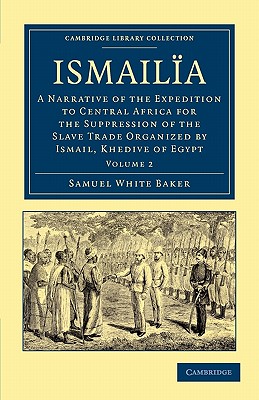 Ismailïa: A Narrative of the Expedition to Central Africa for the Suppression of the Slave Trade Organized by Ismail, Khedive of (Paperback)


Not On Our Shelves—Ships in 1-5 Days
(This book cannot be returned.)
Sir Samuel White Baker (1821 1893) was a traveller and explorer. This two-volume work of 1874 is his account of a military expedition under Ismail Pasha (Ismail the Magnificent, 1830 1895), Khedive of Egypt, to suppress the slave-trade of central Africa between 1869 and 1873. Having found Egyptian citizens exploiting the population of the lawless central lands, Ismail determined to colonize and modernize the Nile basin (now southern Egypt and Sudan). He appointed Baker governor-general and major-general in the Ottoman army. Illustrated with over 50 plates and maps, and with Baker's lively observations of the country and of the society he was trying to reform, this book is a wonderful record of a lost world, and of an important stage in late Ottoman military expansion. In the second volume Baker continues the story of his mixed military successes in the south, and assesses his achievements in Africa.