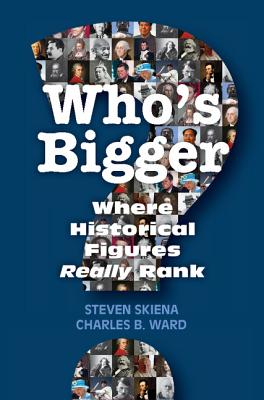 By Steven Skiena, Charles B. Ward


Not On Our Shelves—Ships in 1-5 Days
Is Hitler bigger than Napoleon? Washington bigger than Lincoln? Picasso bigger than Einstein? Quantitative analysts are rapidly finding homes in social and cultural domains, from finance to politics. What about history? In this fascinating book, Steve Skiena and Charles Ward bring quantitative analysis to bear on ranking and comparing historical reputations. They evaluate each person by aggregating the traces of millions of opinions, just as Google ranks webpages. The book includes a technical discussion for readers interested in the details of the methods, but no mathematical or computational background is necessary to understand the rankings or conclusions. Did you know: Got a spare billion dollars, and want to be remembered forever? Your best investment is to get a university named after you. Women remain significantly underrepresented in the historical record compared to men and have long required substantially greater achievement levels to get equally noted for posterity. The long-term prominence of Elvis Presley rivals that of the most famous classical composers. Roll over Beethoven, and tell Tchaikovsky the news Along the way, the authors present the rankings of more than one thousand of history's most significant people in science, politics, entertainment, and all areas of human endeavor. Anyone interested in history or biography can see where their favorite figures place in the grand scheme of things. While revisiting old historical friends and making new ones, you will come to understand the forces that shape historical recognition in a whole new light.