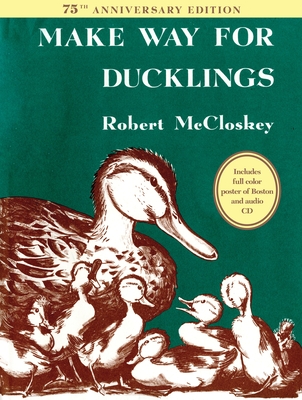 
On Our Shelves Now at:
Celebrate the 75th birthday of Make Way for Ducklings!

Seventy-five years ago, a family of ducks waddled off the page and into the hearts of readers everywhere. The brilliantly illustrated tale of mallards on the move received the Caldecott Medal for the most distinguished picture book of the year, and has been a favorite of generations of readers.

Celebrate the anniversary of Make Way for Ducklings with this special slipcased edition, which includes an audio CD as well as a landmark poster of the ducklings’ Boston by Caldecott Award-winner Paul Zelinsky.
Robert McCloskey (1914-2003) wrote and illustrated some of the most celebrated children’s books ever published. Both Make Way for Ducklings and Time of Wonder were awarded the Caldecott Medal for the most distinguished picture book of the year, and Blueberries for Sal and One Morning in Maine were named Caldecott Honor Books.

McCloskey grew up in Hamilton, Ohio, the setting for Homer Price, his portrait of a quintessential American boyhood. He studied art at Vesper George School of Art in Boston, and continued his studies at the National Academy of Design in New York. He was awarded the Prix de Rome, but delayed his study abroad until after World War II. Subsequently he and his wife, Margaret Durand, moved to Maine, where their two daughters were raised, and where McCloskey found inspiration for many of his books.

Robert McCloskey’s ducklings are immortalized as bronze statues in Boston’s Public Gardens, and are visited by countless children. He leaves a legacy of books that have proved enduringly beloved.