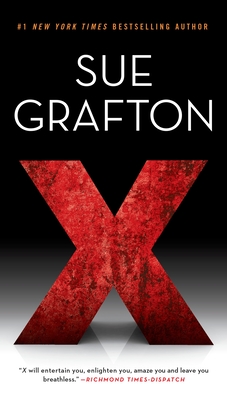 This is book number 24 in the A Kinsey Millhone Novel series.

X:  The number ten. An unknown quantity. A mistake. A cross. A kiss...

Perhaps Sue Grafton’s darkest and most chilling novel, X features a remorseless serial killer who leaves no trace of his crimes. Once again breaking the rules and establishing new paths, Grafton wastes little time identifying this deadly sociopath. The test is whether private investigator Kinsey Millhone can prove her case against him—before she becomes his next victim.
#1 New York Times bestselling author Sue Grafton first introduced Kinsey Millhone in the Alphabet Series in 1982. Soon after, both writer and heroine became icons and international bestsellers. Ms. Grafton was a writer who consistently broke the bonds of genre while never writing the same book twice. Named a Grand Master by the Mystery Writers of America, her awards and honors included the Lifetime Achievement Award from the Private Eye Writers of America, the Ross Macdonald Literary Award, the Cartier Diamond Dagger Award from Britain's Crime Writers' Association, the Lifetime Achievement Award from Malice Domestic, a Lifetime Achievement Award from Bouchercon, three Shamus Awards, and three Anthony Awards—including the first two ever awarded. She passed away in December 2017.
Praise for X

“Grafton’s endless resourcefulness in varying her pitches in this landmark series, graced by her trademark self-deprecating humor, is one of the seven wonders of the genre.”—Kirkus Reviews (starred review)

“Ratcheting up the heat as she heads toward the finish line of her alphabetically-framed series, Grafton has turned in a corker of a novel with X, upping her already high-level game.”—The Boston Globe

“X features a smashing ending that rivals that of her debut, A is for Alibi.”—The Washington Post

More Praise for Sue Grafton and the Alphabet Series

“I’m going to miss Kinsey Millhone. Ever since the first of Sue Grafton’s Alphabet mysteries, A Is For Alibi, came out in 1982, Kinsey has been a good friend and the very model of an independent woman, a gutsy Californian P.I. rocking a traditional man’s job...it’s Kinsey herself who keeps this series so warm and welcoming. She’s smart, she’s resourceful, and she’s tough enough to be sensitive on the right occasions.”—New York Times Book Review

“The consistent quality and skillful innovations in this alphabet series justify all the praise these books have received over the past 35 years.”—Wall Street Journal

“Grafton is a writer of many strengths—crisp characterizations, deft plotting, and eloquent dialogue among them—and she has kept her long-running alphabet mystery series fresh and each new release more welcome than the last.”—Louisville Courier-Journal

“[Grafton’s] ability to give equal weight to the story of the detective and the detective story sets her apart in the world of crime fiction.”—Richmond Times-Dispatch