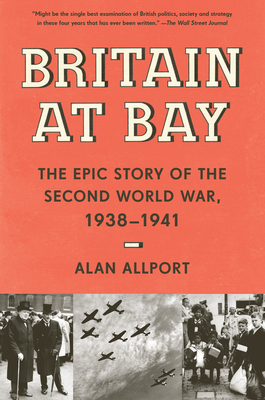 
On Our Shelves Now at:
From statesmen and military commanders to ordinary Britons, a bold, sweeping history of Britain's entrance into World War II—and its efforts to survive it—illuminating the ways in which the war permanently transformed a nation and its people

“Might be the single best examination of British politics, society and strategy in these four years that has ever been written.” —The Wall Street Journal


Here is the many-faceted, world-historically significant story of Britain at war. In looking closely at the military and political dimensions of the conflict’s first crucial years, Alan Allport tackles pressing questions such as whether the war could have been avoided, how it could have been lost, how well the British lived up to their own values, and ultimately, what difference the war made to the fate of the nation. In answering these questions, he reexamines our assumptions and paints a vivid portrait of the ways in which the Second World War transformed British culture and society. This bracing account draws on a lively cast of characters—from the political and military leaders who made the decisions, to the ordinary citizens who lived through them—in a comprehensible and compelling single history of forty-six million people. A sweeping and groundbreaking epic, Britain at Bay gives us a fresh look at the opening years of the war, and illuminates the integral moments that, for better or for worse, made Britain what it is today.

ALAN ALLPORT is a British-born historian, a fellow of the Royal Historical Society, who specializes in the British role in the Second World War. He received a Ph.D. from the University of Pennsylvania and is currently an associate professor of history in the Maxwell School of Citizenship and Public Affairs at Syracuse University. He is the author of Demobbed: Coming Home After the Second World War (2010), which won the Longman-History Today Book of the Year Award, and Browned Off and Bloody-Minded: The British Soldier Goes to War 1939-1945 (2015). He has also written for several publications, including, The Wall Street Journal, The Times (London), The Literary Review, and the London Review of Books. He lives in Syracuse, New York.
Winner of the Historical Writers’ Association Non-fiction Crown Award

“The book's foundations are rock-solid and massive. . . . [It is] much more than a fine narrative account of great personalities and surface actions, of the history of events. It reaches to deeper levels—of geography and grand strategy, and wartime logistics, of shipping logistics and troop deployments. . . . Moreover, he does all this with a rare verbal fluency, often with irony, sometimes tongue-in-cheek. . . . Britain at Bay is beautifully written, thoroughly researched and cleverly presented. . . . I put my copy down with deep satisfaction. History writing, and historical scholarship, sometimes seems as fine as ever it was.” —Paul Kennedy, The Wall Street Journal

“[Allport] moves with ease, wit and insight between the high political and diplomatic, the social and economic, the strategic and military, with biographical vignettes and anecdotes illustrating the lived experience of ordinary people. That it is an epic story there is no doubt. But the twist is that it is a tale of national decline on an epic scale.”  —The Times Literary Supplement

“Britain at Bay is a welcome and highly readable retelling of the story of Britain’s entry into the Second World War and its initial survival against great odds.  Weaving together grand strategy, high politics and the complexities of British society at the time, Alan Allport deftly demolishes some sacred cows along the way and makes the reader think again about the choices and the odds facing Britain.” —Margaret MacMillan, author of Paris 1919

“Original, compelling, timely. This is a history that reminds us of the Britain behind the myth of its Second World War. It’s a history that many will want to argue with. And that everyone should read.” —Lucy Noakes, Rab Butler Professor of Modern History, University of Essex

“Written with style and verve, Britain at Bay will make you think anew not just about the war, but about the Britain and the Britons that fought it. A book for anyone who wants to understand this crucial period in the nation’s history.” —Daniel Todman, author of Britain’s War

“The beautifully-written Britain at Bay is an impregnable fortress of good sense gallantly resisting the crass sentimentality, exaggeration, and naïve hindsight of so many accounts of Britain in the early second world war.  With great élan, built on deep reserves of historical knowledge, it puts Chamberlain and Churchill  in perspective, the Blitz, the Battle of Britain, and Battle of the Atlantic in true proportion, and the progress of the imperial war abroad in panoramic view. Its precise and pointed judgements on events, people, and arguments are a bracing reminder of the power of brilliant history to make us reconsider what we think we know about the most familiar part of the British past.”  —David Edgerton, author of Britain’s War Machine and The Rise and Fall of the British Nation.

“Alan Allport’s Britain at Bay: The Epic Story of the Second World War, 1938–1941 is an extraordinary achievement. Written in lively prose, it tells and analyzes with great perception the story of Britain going to war and its first two years. He displays a deep mastery of the relevant primary and secondary sources and covers an amazing range of activities. He vividly depicts the period’s complicated political, military, domestic, imperial, and international aspects with a rich sense of the people involved. He provides convincing reassessments and revisions of the roles played by figures such as Winston Churchill and Neville Chamberlain, as well as other political and military leaders, both allies and enemies. This is an essential, wide-ranging, and compelling new history of these years.”  ­­­—Peter Stansky, Stanford University

“A masterfully written and hugely convincing riposte to a host of popular assumptions about World War II, Britain at Bay confirms Alan Allport’s high rank among that select group of historians who can convey serious thought through engaging prose. Anyone interested in understanding the ambiguities and paradoxes of ‘The People’s War’ should read this highly readable and stimulating book.”  ­­­—S. P. MacKenzie, McKissick-Dial Professor of History, University of South Carolina

“Simultaneously incisive but nuanced, and studded with sharp pen portraits, Britain at Bay offers a scholarly, invigorating, and beautifully constructed tour d’horizon of perhaps the four most crucial years in our island story.”  —David Kynaston, author of Austerity Britain

“This extraordinary book punctures many of the myths that have become so influential about Britain in the Second World War without robbing the period of its spectacular drama.” —Professor Richard Vinen, author of The Long ’68 and A History in Fragments