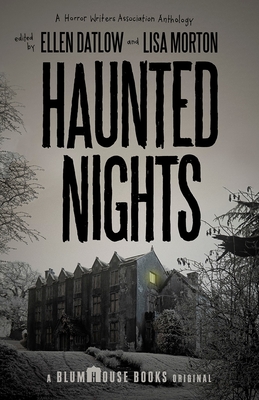 
Special Order—Subject to Availability
Sixteen never-before-published chilling tales that explore every aspect of our darkest holiday, Halloween, co-edited by Ellen Datlow, one of the most successful and respected genre editors, and Lisa Morton, a leading authority on Halloween.

"With Graveyard Weeds and Wolfbane Seeds" by Seanan McGuire
"Dirtmouth" by Stephen Graham Jones"
"A Small Taste of the Old Countr" by Jonathan Maberry
"Wick’s End" by Joanna Parypinski
"The Seventeen Year Itch" by Garth Nix
"A Flicker of Light on Devil’s Night" by Kate Jonez
"Witch-Hazel" by Jeffrey Ford
"Nos Galen Gaeaf" by Kelley Armstrong
"We’re Never Inviting Amber Again" by S. P. Miskowski
"Sisters" by Brian Evenson
"All Through the Night" by Elise Forier Edie
"A Kingdom of Sugar Skulls and Marigolds" by Eric J. Guignard
"The Turn" by Paul Kane
"Jack" by Pat Cadigan
"Lost in the Dark" by John Langan
"The First Lunar Halloween" by John R. Little
Ellen Datlow has been editing science fiction, fantasy, and horror short fiction for over thirty-five years. She currently acquires short fiction for Tor.com. In addition, she has edited more than fifty anthologies, including The Best Horror of the Year series, Fearful Symmetries, The Doll Collection, The Monstrous, and Black Feathers.
A multiple award-winner for her work, Datlow is a recipient of the Karl Edward Wagner Award, given at the British Fantasy Convention for "outstanding contribution to the genre," and has been honored with Life Achievement Awards by both the Horror Writers Association and the World Fantasy Convention.
She lives in New York and co-hosts the monthly Fantastic Fiction Reading Series at KGB Bar. More information can be found at www.datlow.com, on Facebook, and on twitter as @EllenDatlow.

Lisa Morton is a screenwriter, author of non-fiction books, Bram Stoker Award-winning prose writer, editor, and Halloween expert whose work was described by the American Library Association’s Readers’ Advisory Guide to Horror as “consistently dark, unsettling, and frightening.” As a Halloween expert, she has appeared on The History Channel and BBC Radio and in the pages of Real Simple Magazine and The Wall Street Journal, and she served as consultant on the first official U.S. Postal Halloween stamps. Her most recent releases include Ghosts: A Haunted History and Cemetery Dance Select: Lisa Morton. She lives in the San Fernando Valley, and can be found online at www.lisamorton.com.
“The stories of HAUNTED NIGHTS add some fine new twists to our fluid understanding and appreciation of Halloween.”
--The Rue Morgue

"Halloween brings out the best in horror writers, as this fright-packed anthology of 15 new stories with Halloween themes demonstrates...Editors Datlow and Morton have filled this book with an assortment of Halloween treats whose horrors transcend their Holiday setting."
--Publishers Weekly (starred)

"The authors skillfully address the Halloween theme with a great variety of tones and styles, exploring the unholiest holiday from any possible angle, thus providing a very enjoyable book for horror lovers...Intriguing and creepy. In short, a “must-have” book."
--HellNotes

"This is a crazy awesome anthology that, honestly, I’m kind of in love with. Get it! You will enjoy it!"
--HorrorReview.com

"The entire collection is solid and refreshing, featuring great stories that don’t resort to overused tropes and revealing the full breadth of today’s horror, from surreal to creepy to full-blown, visceral terror...the perfect holiday companion, Haunted Nights is an ideal way to celebrate Halloween and its millennial history this year and for many more to come."
--Booklist

"Several [of the stories] are arguably among the strongest work that their authors have produced and are likely contenders for consideration for year’s-best roundups."
--Locus Magazine

"A celebration of various talented writers (with nearly equal representation of male and female authors) and of a rich holiday, Haunted Nights is an enjoyable read for this month or anytime."
--The Riveter Magazine