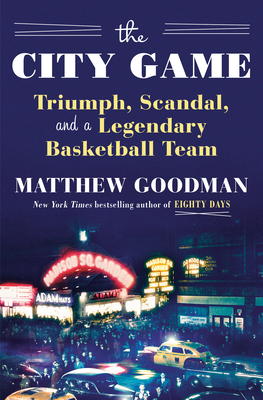 
Special Order—Subject to Availability
The powerful story of a college basketball team who carried an era’s brightest hopes—racial harmony, social mobility, and the triumph of the underdog—but whose success was soon followed by a shocking downfall

“A masterpiece of American storytelling.”—Gilbert King, Pulitzer Prize–winning author of Devil in the Grove

The unlikeliest of champions, the 1949–50 City College Beavers were extraordinary by every measure. New York’s City College was a tuition-free, merit-based college in Harlem known far more for its intellectual achievements and political radicalism than its athletic prowess. Only two years after Jackie Robinson broke the Major League Baseball color barrier—and at a time when the National Basketball Association was still segregated—every single member of the Beavers was either Jewish or African American. But during that remarkable season, under the guidance of the legendary former player Nat Holman, this unheralded group of city kids would stun the basketball world by becoming the only team in history to win the NIT and NCAA tournaments in the same year.

This team, though, proved to be extraordinary in another way: During the following season, all of the team’s starting five were arrested by New York City detectives, charged with conspiring with gamblers to shave points. Almost overnight these beloved heroes turned into fallen idols. The story centers on two teammates and close friends, Eddie Roman and Floyd Layne, one white, one black, each caught up in the scandal, each searching for a path to personal redemption. Though banned from the NBA, Layne continued to devote himself to basketball, teaching the game to young people in his Bronx neighborhood and, ultimately, with Roman’s help, finding another kind of triumph—one that no one could have anticipated.

Drawing on interviews with the surviving members of that championship team, Matthew Goodman has created an indelible portrait of an era of smoke-filled arenas and Borscht Belt hotels, when college basketball was far more popular than the professional game. It was a time when gangsters controlled illegal sports betting, the police were on their payroll, and everyone, it seemed, was getting rich—except for the young men who actually played the games.

Tautly paced and rich with period detail, The City Game tells a story both dramatic and poignant: of political corruption, duplicity in big-time college sports, and the deeper meaning of athletic success.
Matthew Goodman is the author of three previous books of nonfiction: Eighty Days: Nellie Bly and Elizabeth Bisland’s History-Making Race Around the World; The Sun and the Moon: The Remarkable True Account of Hoaxers, Showmen, Dueling Journalists, and Lunar Man-Bats in Nineteenth-Century New York; and Jewish Food: The World at Table. A New York Times bestseller, Eighty Days has been translated into eight languages. Goodman’s work has appeared in The American Scholar, Harvard Review, Salon, and many other publications. He lives in Brooklyn, New York, with his wife and two children.
“Matthew Goodman has composed a portrait of an era that transcends sports. Painstakingly reported and written with great affection, The City Game is a masterpiece of American storytelling.”—Gilbert King, Pulitzer Prize–winning author of Devil in the Grove

“Matthew Goodman tells this remarkable story—simultaneously stirring and upsetting—with the skills it merits: deep reporting, insightful writing, and a sure-footed comprehension of time and place.”—Daniel Okrent, author of The Guarded Gate

“Exhaustively reported, lavishly detailed, expertly told, The City Game is the definitive gripping account of the biggest scandal in the history of American sports. Smoke doesn’t rise to the rafters of Madison Square Garden anymore, but this story of innocence, power, corruption, greed, and exploitation in the world of college athletics is as relevant as ever.”—Stefan Fatsis, author of Word Freak and A Few Seconds of Panic

“Fans of college hoops will devour Goodman’s excellent history. . . . Goodman effectively combines interviews and extensive research to definitively recreate the unfortunate story of the 1949–50 City College of New York basketball team, which won an unprecedented two college championships in the same year (the NIT and the NCAA) before being tainted by a point-shaving scandal involving several of its stars.”—Publishers Weekly (starred review)

“A richly detailed portrait of mid-twentieth-century New York City . . . This is a marvelous, vibrant recounting of a bit of sports history in which the backdrop of New York dominates.”—Booklist (starred review)

“Only one team in history has won both the NIT and NCAA tournaments: the 1949–50 City College of New York Beavers. Goodman’s twisty-but-true narrative takes you along for the team’s crazy ride. A captivating read for a pal who enjoys college sports and a look at New York’s past.”
—New York Post

“Matthew Goodman’s historical account of City College is far more than descriptions of games played in Madison Square Garden and other arenas. He takes readers to the halls of governments; New York City courtrooms; backrooms, where bookies and gamblers plied their trade; and police stations, where willing officers were paid to look away from gambling activities. It is a story both inspiring and upsetting, and is told with skill, insight and a deep understanding of time and place. . . . Goodman’s stirring history reminds us that athletic success often comes at a price. His story of greed and exploitation in college sports one-half century ago is as relevant today as ever.”
—Bookreporter

“The best sports books appeal to serious sports fans but also to readers who couldn’t care less about statistics and play-by-plays and are just looking for a darn good story. Matthew Goodman’s The City Game: Triumph, Scandal, and a Legendary Basketball Team fits the bill as one of those gems. Goodman drops readers straight into postwar New York City, brilliant detail by brilliant detail, at a time when it was plagued with police corruption, organized crime and illegal gambling. The book is a wonderfully reported glimpse of city history, and the star is the City College basketball team, one of the most successful yet notorious athletic squads ever.”—Juliet Macur, The New York Times

“[A] wonderful new book . . . a fascinating look at a team full of talented young men who torpedoed their careers because they were unable to resist the lure of easy money . . . The CCNY point-shaving scandal remains, decades after it happened, a heartbreaking story of venality, and Goodman turns out to be the perfect author to tell it. The City Game is a gripping history of one of college basketball’s darkest moments, an all too human tale of young people blowing up their futures in a misguided attempt to make good.”—Michael Schaub, NPR

“A sports-writing masterpiece . . . In The City Game, Goodman has found a cast of characters as rich as any novel’s.”—Rich Cohen, Jewish Review of Books