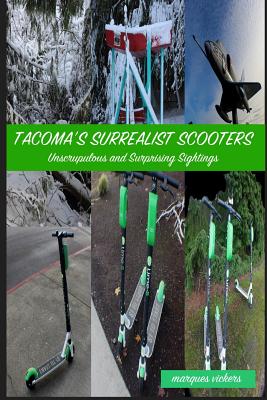 
Not On Our Shelves—Ships in 1-5 Days
(This book cannot be returned.)
Since establishing a free-floating scooter rental program in late 2018, the city of Tacoma has been plagued by missing equipment. Author and photographer Marques Vickers has meticulously tracked down and photographed missing inventory in some of the most remote and incredulous locations imaginable. This edition documents the Odyssey of missing scooters with tongue-in-check evidence offering neither explanation nor commentary to explain the seemingly implausible.Dockless scooters have proven ideal for short distance trips and have become even more popular than bicycle sharing programs. The city of Seattle currently operates approximately 20% of the national electrical bicycle inventory, but has yet to permit a scooter-sharing program. This formality will likely be overcome shortly. San Francisco, Los Angeles and Portland have instituted programs in place.The scooters are intended to be operated on sidewalks, roads, alleys, and shoulders, but not in bike lanes, trails, or pedestrian-only paths. The rules regarding safety standards, permit requirements, service levels, and parking of the scooters have been modeled after Seattle's bike sharing program. Within Tacoma, two mainstream scooter companies, Lime and Bird, currently participate in the mobility scooter program. Inventory maintenance is conducted by a unique band of independent contractors called Lime Juicers and Bird Nesters.As evening descends and scooter power meters lower, these individuals roam the streets and scavenger depleted scooters. The equipment is then recharged at their residence and relocated back to prominent sidewalk locations the next morning.Unpleasant realities have darkened the program's long-term outlook in several other metropolitan markets.Exposed collisions at 15 miles-per-hour are extremely hazardous. In a 2019 study published in the medical journal JAMA Network Open examining scooter ridership injuries, the results were predictable. In tracking emergency room visitations, contusions, sprains, and lacerations were the most common injuries. More severe multiple bone fractures, broken ribs, joint injuries, and head trauma were common. Two disturbing factors emerged from these statistics. The majority of injured riders were not wearing protective helmets and a disproportionate percentage were minors.There are numerous financial and ecological challenges accompanying this technology. The lithium batteries require processing centers to be recycled. Some of the fleet operators claim these programs are handled in-house. The layered equipment piling up in scrap years makes some of these claims questionable. In China, where bicycle and scooter sharing programs initiated, published reports indicate abandoned equipment is filling vast fields outside major cities.There has become a significant counter reaction to the proliferation of these lightweight transportation vehicles. Extreme reactions have varied from throwing scooters into bodies of water, trashcans, and even toilets.One of the intentioned objectives of the scooter-sharing program is to encourage worker commuting. Statistics have confirmed this has occurred. However, a commuter usually orders their own equipment (often priced under $500) effectively ending an important stream of recurring revenue to the scooter companies.Missing scooter equipment, snowy sidewalks, vandalism, charger fraud and increasing government regulation scrutiny have dampened investors' interest in scooter-sharing companies. Venture Capitalists crave innovation...but only if it is financially profitable and sustainable. Illegal but readily available conversion kits (retailing for under $35) have enabled unscrupulous users to transform public accessible equipment into personal scooters. This edition photographs some of their illicit and improbable parked locations.