Thirty-Three Years: The Unfiltered Memoir of a Cop (Paperback) 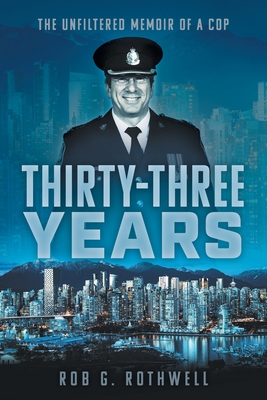 Thirty-Three Years: The Unfiltered Memoir of a Cop (Paperback)

"That was it. That was the moment I knew I wanted to be a cop."
When Rob Rothwell is a na ve, directionless eighteen-year old, he gets invited on a ride-along with a young cop ... and the wild night that ensues sends him hurtling into a thirty-three-year career in policing. And in this unabashedly unfiltered account of his years in Vancouver PD, Rob takes readers on their own thrilling ride-along.
With tough-guy wit and unexpected well-springs of deep compassion, Thirty-Three Years shows the best and worst of humanity from the perspective of a cop daily putting his life on the line in the streets of a great city. From the wild action of a car chase; to dogged evidence-gathering; to the dangers and intricacies of an undercover drug operation, to confrontations with sudden, unspeakable horror, Rob's wry, humanist perspective brings us inside the life of a cop. His story will appeal to the legions of police procedural fans out there as well as those considering a life in law enforcement. And for those who simply love memoir as a way of vicariously living fascinating lives-it will not disappoint.