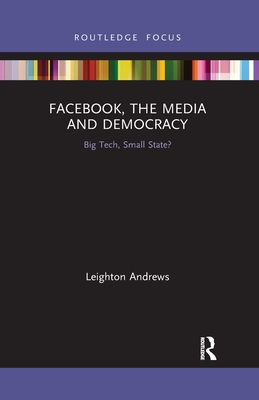 Facebook, the Media and Democracy examines Facebook Inc. and the impact that it has had and continues to have on media and democracy around the world.

Drawing on interviews with Facebook users of different kinds and dialogue with politicians, regulators, civil society and media commentators, as well as detailed documentary scrutiny of legislative and regulatory proposals and Facebook's corporate statements, the book presents a comprehensive but clear overview of the current debate around Facebook and the global debate on the regulation of social media in the era of 'surveillance capitalism.' Chapters examine the business and growing institutional power of Facebook as it has unfolded over the fifteen years since its creation, the benefits and meanings that it has provided for its users, its disruptive challenge to the contemporary media environment, its shaping of conversations, and the emerging calls for its further regulation. The book considers Facebook's alleged role in the rise of democratic movements around the world as well as its suggested role in the election of Donald Trump and the UK vote to leave the European Union.

This book argues that Facebook, in some shape or form, is likely to be with us into the foreseeable future and that how we address the societal challenges that it provokes, and the economic system that underpins it, will define how human societies demonstrate their capacity to protect and enhance democracy and ensure that no corporation can set itself above democratic institutions. This is an important research volume for academics and researchers in the areas of media studies, communications, social media and political science.

Leighton Andrews is a professor of practice in Public Service Leadership and Innovation in Cardiff Business School. He was an elected politician, serving in the National Assembly for Wales from 2003 to 2016, and was a Minister in the Welsh Government between 2007 and 2016. He is a former head of Public Affairs for the BBC in London, responsible for the corporation's relationships with the UK and European Parliaments. He is the author of Wales Says Yes (1999), Ministering to Education (2014) and academic articles on a variety of subjects, including broadcasting policy and technology regulation.