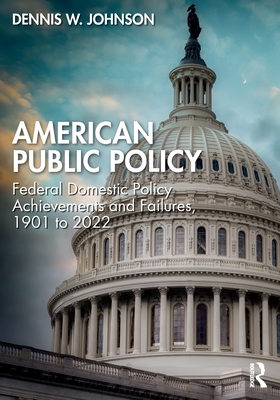 This is a sweeping narrative of American domestic public policy--its triumphs, struggles, and failures over the past 120 years. In a larger sense, it is a reflection on how the United States has grown and matured, faced challenges and opportunities, and how its federal leaders and policymakers have responded or failed to confront pressing problems. Moreover, American Public Policy addresses the hurdles and challenges that still lie ahead.

Four critical questions are posed and answered. First, what were the most significant adversities endured by the American people? Second, what were the landmark domestic policies crafted by the president, enacted by Congress, or issued in Supreme Court decisions? Third, what did they fail to do? Finally, how well have federal policymakers met the key challenges facing America: income inequality, racism, financial crises, terrorist attacks, climate change, gun violence, and other pressures? And what do we still need to do? This book reaches out to students of public policy, American government, US history, and contemporary affairs, as well as to citizens, journalists, and policy practitioners.
Dennis W. Johnson is Professor Emeritus, Graduate School of Political Management, George Washington University. He has written six books (with several second and third editions) and edited four others. Most relevant to this current book is The Laws That Shaped America (Routledge, 2009), which focused on fifteen laws--from the Northwest Ordinance (1789) to the Voting Rights Act (1965) and the National Environmental Policy Act (1970)--which were foundational in the shaping of American life. Over the course of thirty-five years of teaching, writing, and research, Johnson has focused on American government and domestic public policy. He has been the Director of the Masters in Legislative Affairs program and Associate Dean of the Graduate School of Political Management at GWU. Throughout the years, he has taught both graduate and undergraduate courses on public policy, executive-legislative relations, federal budget-making policy, energy and environmental policy, the presidency, and American national government.