Iranian Immigration to Israel: History and Voices, in the Shadow of Kings (Routledge Studies in Middle Eastern Society) (Hardcover) 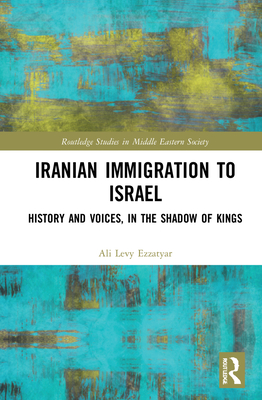 Iranian Immigration to Israel: History and Voices, in the Shadow of Kings (Routledge Studies in Middle Eastern Society) (Hardcover)

Exploring the fascinating history behind Iranian-Jewish immigration to Israel, this book offers a rare and untold history of one of Israel's Middle Eastern Jewish populations.

Over the 20th century, thousands among Iran's Jewish community left their ancestral homes and immigrated to the Jewish State, while thousands of others remained in Iran, even after the birth of the Islamic Republic of Iran. Using firsthand narratives, the evolution of Zionist activities and recruitment in Iran over the last century is covered, alongside an Iranian-Jewish population that, unlike other Middle Eastern Jewish communities, did not ultimately arrive in the Holy Land as a majority of their community. For those that did arrive (or, make aliyah) the Israeli nation-building process had unique ramifications. The integrative process and current status of the Iranian community in Israel is also examined, providing an intimate picture of Iranian life in Israel, nearly 75 years after Israel's establishment.

A natural addition to any collection on Jewish or Israeli history and essential reading for a full understanding of Iran-Israel relations, enthusiasts of Israeli nation-building and affairs, as well as Iranian history, demographics, and politics will find this book invaluable.

Ali Levy Ezzatyar is a lawyer and US diplomat. Prior to joining the Foreign Service and the US Agency for International Development, he practiced law at a number of prominent international firms and served as Executive Director of the AMENA Center for Entrepreneurship and Development, at the University of California, Berkeley. He remains a senior adviser to the Center. His first book, The Last Mufti of Iranian Kurdistan: Ethnic and Religious Implications in the Greater Middle East, was published in 2016. His articles on the Middle East have been featured in publications such as the Los Angeles Times and The Christian Science Monitor; he has appeared as an analyst on broadcasts such as the BBC World, Al Jazeera, and NPR, among others.The information and views contained in this book are those of the author and do not necessarily represent the views of the US government.