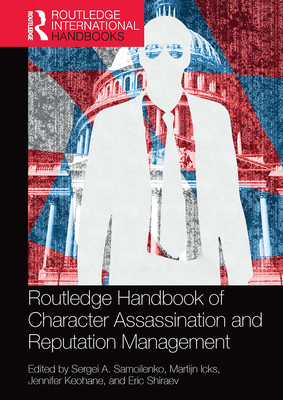 In modern politics as well as in historical times, character attacks abound. Words and images, like symbolic and psychological weapons, have sullied or destroyed numerous reputations. People mobilize significant material and psychological resources to defend themselves against such attacks. How does character assassination "work," and when does it not? Why do many targets fall so easily when they are under character attack? How can one prevent attacks and defend against them?

The Routledge Handbook of Character Assassination and Reputation Management offers the first comprehensive examination of character assassination. Moving beyond studying corporate reputation management and how public figures enact and maintain their reputation, this lively volume offers a framework and cases to help understand, critically analyze, and effectively defend against such attacks. Written by an international and interdisciplinary team of experts, the book begins with a theoretical introduction and extensive description of the "five pillars" of character assassination: (1) the attacker, (2) the target, (3) the media, (4) the public, and (5) the context. The remaining chapters present engaging case studies suitable for class discussion. These include:

defamation in US politics;

This handbook will prove invaluable to undergraduate and postgraduate students in communication, political science, history, sociology, and psychology departments. It will also help researchers become independent, critical, and informed thinkers capable of avoiding the pressure and manipulations of the media.

Sergei A. Samoilenko is a public relations instructor in the Department of Communication at George Mason University. His research focuses on issues in crisis communication, reputation management, and post-Soviet studies. He is a co-editor of Deception, Fake News and Misinformation Online and Traditional and New Media Studies in Eastern Europe and Eurasia.Martijn Icks is Lecturer in Ancient History at the University of Amsterdam. He specializes in Roman imperial history and the history of character assassination. His study on the Roman emperor Elagabalus has appeared in three languages.Jennifer Keohane is Assistant Professor in the Klein Family School of Communications Design at the University of Baltimore. Her current research explores the rhetoric of the labor movement in the United States. She is the author of Communist Rhetoric and Feminist Voices in Cold War America, and her other research has appeared in Women's Studies in Communication, Rhetoric Society Quarterly and Rhetoric Review.Eric Shiraev teaches at George Mason University. He is an author, a co-author, and co-editor of twenty books and numerous publications in the fields of political psychology, international relations, and cross-cultural studies. Besides his teaching and scholarly work, Shiraev writes policy briefs and opinion essays for government agencies, NGOs, and the media.