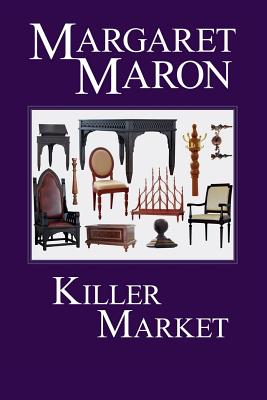 This is book number 5 in the Deborah Knott Mysteries series.

Since the first Deborah Knott mystery, Bootlegger's Daughter, swept the top mystery awards in 1993, the feisty judge has proven herself an investigator ranking with today's best--dedicated to justice, driven by private demons, and prone to decide with her heart. From the first, Deborah Knott's co-star has been an insider's North Carolina from the back woods to the Crystal Coast. Now in the series' fifth book, author Margaret Maron slightly alters the landscape, giving Deborah a chance to investigate the interior geography of human folly in an exquisite plot created with polish and lan...

Arriving in High Point, North Carolina, to substitute for a vacationing colleague, Judge Deborah Knott finds there is no room at the inn, the Radisson, or anywhere else. The International Home Furnishings Market, with the largest assortment of furniture and home decorations in the world, has taken over the town and left the judge hanging. All Deborah wants is a bed for the night, not thousands of living room suites and dining room ensembles. And the last thing she needs is murder.

A chilling misadventure begins when Deborah, hunting high and lowboy for lodging, is befriended by an eccentric old lady calling herself Mrs. Jernigan. Deborah follows the chiffon-clad Good Samaritan through rooms of French provincial and high-tech modern when the lady suddenly vanishes, leaving a sexy hunk of manhood dead and motionless on a pricey piece of "motion" furniture.

Who is the mysterious Mrs. Jernigan and why is Deborah herself suspected of killing a furniture executive who specialized in making after-hours bedroom arrangements and cutthroat deals? To clear her name, Deborah has to table all other plans and investigate. But the knotty heart of this case is a secret well hidden behind a wall of silence about a woman's past. It will take all Deborah's courtroom experience and intuitive skills to strip through layers of deception to solve a whodunit that is strictly top-shelf.