My Daughter, My Son: An Adolscent's Gender Transition Experienced by Mother & Child (Paperback) 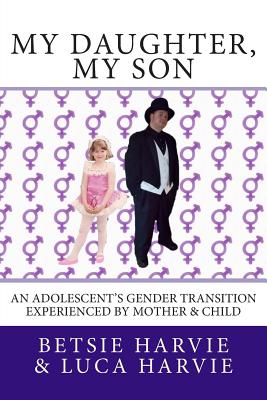 My Daughter, My Son: An Adolscent's Gender Transition Experienced by Mother & Child (Paperback)


Not On Our Shelves—Ships in 1-5 Days
(This book cannot be returned.)
""Life isn't worth living if I can't be a boy." My Daughter, My Son" is a riveting inside view from mother and child of a gender transformation. You will be drawn into this human interest story of a middle class family struggling with one of the most emotionally challenging, financially devastating, dangerous and awkward situations they could be thrown into. It will take Betsie's seemingly endless capacity to love and Luca's unwavering determination to bring congruity to the young man's body and life. Ultimately, the authors' bravery and tenacity will carry the day. Brimming with wit and wry charm, Betsie and Luca are candid and relatable. "My Daughter, My Son" includes photographs ranging from Betsie holding her baby daughter, to Luca as an adult. They put regular faces you can identify with to the issue of being trans. Betsie and Luca's words flow straight from their hearts to the page. Topics in this autobiography include: gender dysphoria, gender identity, transsexualism, hormone therapy, transition, gender reassignment surgery, bullying, rape, drug and alcohol addiction, attempted suicide, police brutality, domestic abuse and depression.
Luca is a post-op transsexual man residing in Oregon with his wife of nine years. His poetry and a pencil sketch were published in Dean Kotula's book The Phallus Palace (Alyson Publications, 2002.) He was a panelist alongside Diane Ellaborn for a presentation about trans youth at a transgender convention in Boston, Massachusetts in 1998. In 2002 he participated in a sex change surgery results workshop at the True Spirit FTM convention in Washington, D.C. Luca was a panelist at Illinois Wesleyan University, Bloomington, Illinois, on gender identity disorders and female to male transsexualism in 2005. He's been interviewed by college students majoring in Women's Studies, Social Work and Child Development from Oregon State University, Portland, Oregon and Bunker Hill Community College, Boston, Massachusetts. Luca is gratified to be a member of PFLAG and a supporter of TransActive. Betsie is the proud mother of a trans son. Her greatest joy in life is being a mother and mother-in-law. Leaving the North Shore of Massachusetts for the sunshine of Arizona, Betsie currently resides there with her husband and two cats. She is delighted to be a member of PFLAG and the East Valley Meet-Up Writing Group. Betsie was a contributor to Dean Kotula's book The Phallus Palace (Alyson Publications, 2002) while Luca was still pre-op.