Walks on the Margins, a Story of Bipolar Illness (Paperback) 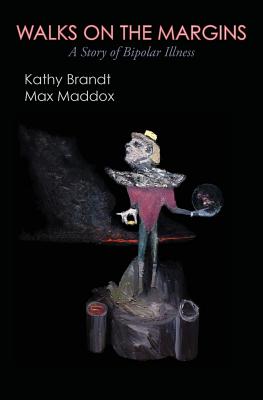 Walks on the Margins, a Story of Bipolar Illness (Paperback)


Not On Our Shelves—Ships in 1-5 Days
(This book cannot be returned.)
2014 GOLDEN QUILL AWARD 2014 EVVY BOOK AWARD 2014 KINDLE BOOK REVIEW AWARD SEMIFINALIST 2013 IOWA REVIEW AWARD IN NON-FICTION FINALIST In "Walks on the Margins," Kathy Brandt and her son, Max Maddox, write in alternating chapters about what it's like to battle bipolar illness. Kathy tells of the valiant and unapologetic struggle of a mother trying to find a semblance of her son as they are both wrapped in the turmoil of bipolar disorder. Exuding the most resilient love for her son and family, her narrative shows how it feels to be in the circle of those intimately affected by mental illness and in a world beset by institutional failure. Max depicts reality through the lens of the artist he is yet to become. With a callous, ruthless self-scrutiny, he retells both his manic and depressive episodes. At times unnerving, the fierce honesty of his prose is ameliorated by humor and a highly visual writing style. Max conveys a playful and unsettling beauty that he scratches off the seemly dim surface of day-to-day life. It's the whiz kid and his vexed mother. His emotional unrest and her unhindered kindness. Mother and son weave their narratives into a single powerful story about living with bipolar disorder. EDITORIAL REVIEWS "Walks on the Margins, told with brutal honesty, great skill and sweeping passages of lyric beauty, is nothing short of a landmark in the literature of mental illness." - Kathryn Eastburn, KRCC Public Radio "Novelist Kathy Brandt and her son, Max, take readers on a terrifying journey through our nation's broken, overwhelmed, underfunded, and frustrating mental health care system. Walks On The Margins will make you angry. It will make you cry. It will also inspire you Ultimately, it is testament to the unconditional love of a parent and a son's determination to overcome a serious mental illness. Writing in tandem, they have not only told their personal story, but have told the story of thousands of other American families who are everyday heroes -- and they have told it extremely well." - Pete Earley, former Washington Post journalist and author of CRAZY: A Father's Search Through America's Mental Health Madness "a heart-breaking, heart-warming story. The entire family rides a rollercoaster of illusions, fear, anger and hope, while navigating a fragmented mental health care system. Do you want to know what it's like for a family to confront mental illness? Read this book. It's the real deal." - Michael J. Fitzpatrick, Executive Director, National Alliance on Mental Illness (NAMI)