Brain over Binge: Why I Was Bulimic, Why Conventional Therapy Didn't Work, and How I Recovered for Good (Paperback) 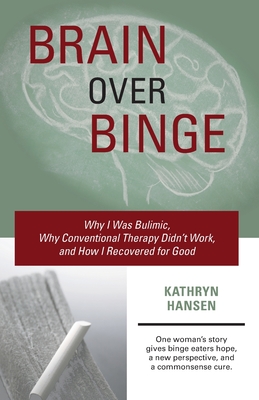 Brain over Binge: Why I Was Bulimic, Why Conventional Therapy Didn't Work, and How I Recovered for Good (Paperback)


Special Order—Subject to Availability
(This book cannot be returned.)
Brain over Binge provides both a gripping personal account and an informative scientific perspective on bulimia and binge eating disorder. The author, Kathryn Hansen, candidly shares her experience as a bulimic and her alternative approach to recovery. Brain over Binge is different than other eating disorder books which typically present binge eating and purging as symptoms of complex emotional and psychological problems. Kathryn disputes this mainstream idea and explains why traditional eating disorder therapy failed her and fails many. She explains how she came to understand her bulimia in a new way - as a function of her brain, and how she used the power of her brain to recover - quickly and permanently. Kathryn also sheds new light on eating disorder topics such as low self-esteem, poor body image, and dieting. Brain over Binge is a brave book that will help many by delivering an informed and inspiring message of free will, self-reliance, and self-control.
Kathryn Hansen recovered from bulimia independently, abruptly, and completely over 6 years ago; and soon after her recovery, she was fully convinced she had a powerful story to tell - a story that could give other bulimics and those with binge eating disorder hope, a new perspective, and a commonsense cure. She dedicated herself to candidly documenting her experience, in hope that her book can shed new light on these disorders that ruin so many lives. For a long time, Kathryn felt like a hopeless case. She thought maybe she could never completely recover. She thought she would have to deal with her eating disorder one-day-at-a-time for the rest of her life, but she doesn't. She has zero risk for relapse, even during stressful times in her life. She believes that if recovery was possible for her, it is possible for anyone. Kathryn recovered only after she parted with therapy and let go of most of its ideas. She found another way to end her bulimia, and now she shares her alternative approach with others in Brain over Binge. Kathryn hopes her voice can be a voice of change, a voice for those who are frustrated with therapy or who simply can't afford it, a voice that will help many escape the daily torment of binge eating and purging.