Leaving the Hall Light on (Paperback) 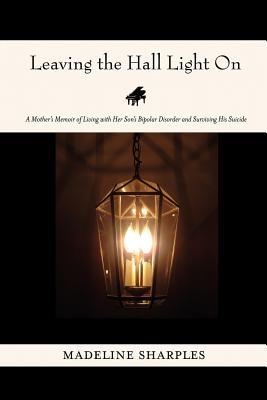 Leaving the Hall Light on (Paperback)


Not On Our Shelves—Ships in 1-5 Days
(This book cannot be returned.)
"A moving read of tragedy, trying to prevent it, and coping with life after." - Midwest Book Review "Moving, intimate and very inspiring." - Mark Shelmerdine, CEO, Jeffers Press "Poetically visceral, emotionally honest. I will be a better, more empathic psychiatrist, and a better person and friend after reading this extraordinary memoir." - Irvin D. Godofsky, M.D. Leaving the Hall Light On charts the near-destruction of one middle-class family whose son committed suicide after a seven-year struggle with bipolar disorder. Madeline Sharples, author, poet and web journalist, goes deep into her own well of grief to describe her anger, frustration and guilt. She describes many attempts - some successful, some not - to have her son committed to hospital and to keep him on his medication. The book also charts her and her family's redemption, how she considered suicide herself, and ultimately, her decision to live and take care of herself as a woman, wife, mother and writer. A note from the author: I encourage you to read my book if you have been touched by bipolar disorder or suicide. And even if you have not, my book will inspire you to survive your own tragedies. As author Jessica Bell says: Leaving the Hall Light On is "a remarkable book and it SHOULD be read." - Madeline Sharples.