Yma Sumac: The Art Behind the Legend (Paperback) 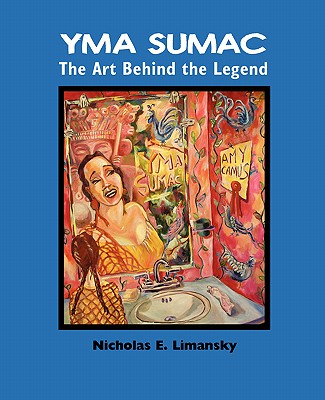 Yma Sumac: The Art Behind the Legend (Paperback)


Not On Our Shelves—Ships in 1-5 Days
(This book cannot be returned.)
Half the range of the piano keyboard At last a serious critical examination of the utterly unique vocalist celebrated for her "four-octave voice," Yma Sumac A confounding, sometimes heartbreaking, mixture of absurd show-biz hype, stunning virtuosity, and sometimes ravishing artistry, Yma Sumac was a firmly established recording artist of the folk music of her native Peru when she came to America to be "discovered." And discovered she was-by the publicity department of Capitol Records and the "Exotica" pop music maestro Les Baxter. From there her story becomes ever more tangled and weird-and deeply interesting. Yma herself is an amazingly contradictory mix. Nicholas Limansky (a formally trained professional singer) is able to demonstrate that she was startlingly sophisticated technically even though almost entirely self-taught. What is perhaps even more astonishing than the celebrated 4-octave range of her voice-and its effortless clarity and sweetness-was the nearly incredible longevity-fully 4 decades -of her ability to command it. With the enthusiastic collaboration of her quixotic, charming, slightly rascally husband, she went along with the corruption of her artistic identity by the gleefully amoral record-company publicists, creators of her public persona-Inca Princess (sometimes Priestess )-from a primitive mountain tribe (or, sometimes, descended from a line of kings that was said to go back several hundred years before there were any Incas) Imperious as any diva with her intimates and musical collaborators, she maintained an unassailable dignity and unaffected graciousness as a performer and in relation to her fans. All documented in this large, lavishly illustrated volume-an extensively researched biography (her birth date established once and for all ), many personal anecdotes of her intimates, technical discussions of her voice and her music, generous excerpts from reviews and priceless examples of publicity material. About the author: Nicholas E. Limansky studied voice at Peabody Conservatory in Baltimore and has a performance degree from the University of West Virginia. He has sung with The Bach Aria Group, Musica Sacra, New York Choral Artists (of the New York Philharmonic), and the Opera Orchestra of New York. He reviews new vocal releases of historical singers for Opera News, The Record Collector, Classical Singer and Opera Quarterly. His vocal specialty is the acuto-sfogato (extended-vocal-range) soprano. His work on Yma Sumac has covered nearly three decades.